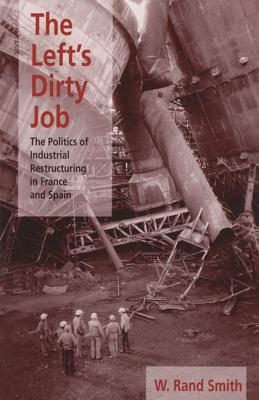 The Politics of Industrial Restructuring in France and Spain

The Left’s Dirty Job compares the experiences of recent socialist governments in France and Spain, examining how the governments of François Mitterrand (1981–1995) and Felipe González (1982–1996) provide a key test of whether a leftist approach to industrial restructuring is possible. This study argues that, in fact, both governments’ policies generally resembled those of other European governments in their emphasis on market-adapting measures that eliminated thousands of jobs while providing income support for displaced workers. Featuring extensive field work and interviews with over one hundred political, labor, and business leaders, this study is the first systematic comparison of these important socialist governments.

Praise For The Left's Dirty Job: The Politics of Industrial Restructuring in France and Spain…

“The book makes . . . important contributions to comparative politics and comparative political economy. . . . Smith has made a convincing case for looking at the political basis of economic change, and has provided a useful book for all those interested in how the left governs in the face of having to do the ‘dirty job’ of economic restructuring.”
--Canadian Journal of Political Science

W. Rand Smith is professor of politics and associate dean of the faculty at Lake Forest College. He has also taught at the University of Michigan, École Nationale Supérieure des Mines (Paris), and Institut d’Études Politiques (Grenoble). The author of Crisis in the French Labor Movement: A Grassroots Perspective (1987), Smith has published articles on French and Spanish political economy in such journals as Politics & Society, Comparative Politics, and West European Politics.
Loading...
or support indie stores by buying on