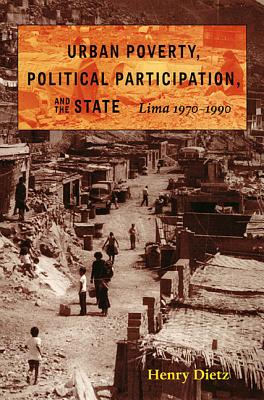 Urban Poverty, Political Participation, and the State offers an unparalleled longitudinal view of how the urban poor saw themselves and their neighborhoods and how they behaved and organized to provide their neighborhoods with basic goods and services.  Grounding research on theoretical notions from Albert Hirschman and an analytical framework from Verba and Nie, Dietz produces findings that hold great interest for comparativists and students of political behavior in general.

“Through sustained and careful empirical analysis, Dietz has made an important contribution to political science; by focusing on electoral and nonelectoral participation, he provides a uniquely political optic through which to view the transformation of Latin American urban politics over the last three decades. It is a work to be studied, debated, replicated, and extended. It will certainly contribute to the continuing interest in understanding the problem of the urban poor in Latin America.
--Journal of Interamerican Studies and World Affairs

Henry Dietz is a professor in the Department of Government at the University of Texas, Austin, and has been the associate dean of the College of Liberal Arts and associate director of the Institute of Latin American Studies.  He has received grants from the National Science Foundation, the Tinker Foundation, the Heinz Foundation, and the American Philosophical Society.  He is the recipient of numerous teaching awards at the University of Texas and was a Peace Corps volunteer in Peru from 1964 to 1966.
Loading...
or support indie stores by buying on