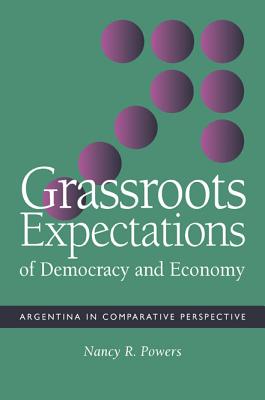 Grassroots Expectations of Democracy and Economy

This highly readable study addresses a range of fundamental questions about the interaction of politics and economics, from a grassroots perspective in post-transition Argentina. Nancy R. Powers looks at the lives and political views of Argentines of little to modest means to examine systematically how their political interests, and their evaluations of democracy, are formed.  Based on the author’s fieldwork in Argentina, the analysis extends to countries of Latin America and Eastern Europe facing similarly difficult political and economic changes.

Powers uses in-depth interviews to examine how (not simply what) ordinary people think about their standard of living, their government, and the democratic regime. She explains why they sometimes do, but more often do not, see their material conditions as political problems, arguing that the type of hardship and the possibilities for coping with it are more politically significant than the degree of hardship.  She analyzes alternative ways in which people define democracy and judge its legitimacy.

Not only does Powers demonstrate contradictions and gaps in the existing scholarship on economic voting, social movements, and populism, she also shows how those literatures are addressing similar questions but are failing to “talk” to one another. Powers goes on to build a more comprehensive theory of how people at the grassroots form their political interests. To analyze why people perceive only some of their material hardships as political problems, she brings into the study of politics ideas drawn from Amartya Sen and other scholars of poverty.

“ . . . offers a wealth of insights into the conditions under which poor people respond--or do not respond--politically to material deprivation. “
--Comparative Politics

Nancy R. Powers is assistant professor of political science at Florida State University. Her research focuses on the political ideas of nonelites (ordinary members of society), poverty and material hardship, economic development, and the quality of democracy in Latin America. She has published in the Canadian Journal of Political Science and the Journal of Interamerican Studies and World Affairs. She received her doctorate from the University of Notre Dame.