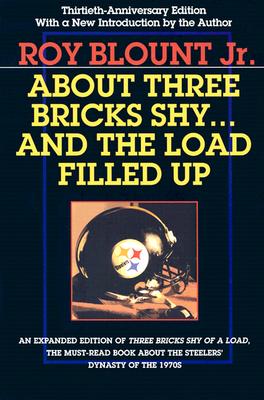 And The Load Filled Up (The Library of Pittsburgh Sports History)

Any number of writers could spend an entire season with an NFL team, from the first day of training camp until the last pick of the draft, and come up with an interesting book. But only Roy Blount Jr. could capture the pain, the joy, the fears, the humor—in short, the heart—of a championship team.

In 1973, the Pittsburgh Steelers were super, but missed the bowl. Blount’s portrait of a team poised to dominate the NFL for more than a decade recounts the gridiron accomplishments and off-the-field lives of players, coaches, wives, fans, and owners. About Three Bricks Shy . . . is considered a classic; Sports Illustrated recently named it one of the Top 100 Sports Books of All Time. This thirtieth-anniversary edition includes additional chapters on the Steelers’ Super Bowl wins, written for the 1989 paperback, as well as a new introduction by the author.

Roy Alton Blount Jr. ( born October 4, 1941) is an American writer, speaker, reporter, and humorist. He appeared as himself in Treme. He performs with the Rock Bottom Remainders, a rock band composed entirely of writers. He is also a former president of the Authors Guild.

Praise For About Three Bricks Shy: And The Load Filled Up (The Library of Pittsburgh Sports History)…

“Not merely is ‘Three Bricks’ funny, smart, perceptive and winning, there’s also a lovely quality about it that, for all the ferocity of the gridiron and the profanity of some of its language, I’d call gentleness. It’s a book about men in groups, this particular group being one that plays a very rough game, and it’s actually far less about football than about people.”
—The Washington Post

"A terrific book. . . . I have never read anything else on pro football, fiction or nonfiction, as good as this."
—New York Times Book Review

"Both a literary and journalistic masterpiece. . . . At last, a superb and superbly hilarious writer has gone deep beneath the surface of the sport and wrenched the truth from it."
—Dan Jenkins, author of Semi-Tough