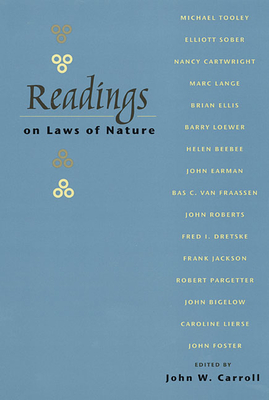 Readings On Laws Of Nature

Readings on Laws of Nature is the first anthology to offer a contemporary history of the problem of laws. The book is organized around three key issues: the matter of distinguishing laws from mere correlations, questions concerning inductive reasoning and laws, and the consideration of whether there are any true laws in science.

Designed for class use, the anthology covers a remarkably broad range of views and concerns, and consists exclusively of articles that have proved highly influential in the field. Readings on Laws of Nature will also serve as a valuable research and reference tool for philosophers who do not specialize in the subject, but who have occasion to examine concepts relating to the laws of nature in their own work.


Praise For Readings On Laws Of Nature…

“An excellent introduction to recent debates on laws which focus mostly on the problem of ‘ceteris paribus’ conditions. For anyone familiar with the early exposition of necessitarian and regularity views in the 1970s and 1980s, this collection is most valuable as it brings together some of the most important recent contributions.”
—Philosophy  in Review

“The notion of a law of nature has long been recognized to be a central topic for the philosophy of science.  In recent years a great deal of valuable work has been done, from widely differing viewpoints.  An anthology was clearly required.  Here is a most useful one, edited with an introduction by John W. Carroll, himself a player in the game.”

“Carroll has done teachers, student, and researchers in the philosophy of science a tremendous service by bringing together this set of articles.  Anyone who reads through this collection will have a good grasp of the state of the art in research on the philosophical problem of laws, and how we got here.”

John W. Carroll, author of Laws of Nature, is associate professor of philosophy at North Carolina State University.
Loading...
or
Not Currently Available for Direct Purchase