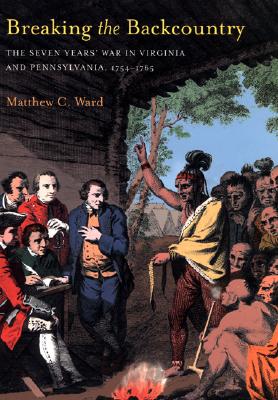 Even as the 250th anniversary of its outbreak approaches, the Seven Years' War (otherwise known as the French and Indian War) is still not wholly understood. Most accounts tell the story as a military struggle between British and French forces, with shifting alliances of Indians, culminating in the British conquest of Canada. Scholarly and popular works alike, including James Fennimore Cooper's Last of the Mohicans, focus on the action in the Hudson River Valley and the St. Lawrence Seaway. Matthew C. Ward tells the compelling story of the war from the point of view of the region where it actually began, and whose people felt the devastating effects of war most keenly-the backcountry communities of Virginia and Pennsylvania.

Previous wars in North America had been fought largely on the New England and New York frontiers. But on May 28, 1754, when a young George Washington commanded the first shot fired in western Pennsylvania, fighting spread for the first time to Virginia and Pennsylvania. Ward's original research reveals that on the eve of the Seven Years' War the communities of these colonies were isolated, economically weak, and culturally diverse. He shows in riveting detail how, despite the British empire's triumph, the war brought social chaos, sickness, hunger, punishment, and violence, to the backcountry, much of it at the hands of Indian warriors.

Ward's fresh analysis reveals that Indian raids were not random skirmishes, but part of an organized strategy that included psychological warfare designed to make settlers flee Indian territories. It was the awesome effectiveness of this “guerilla” warfare, Ward argues, that led to the most enduring legacies of the war: Indian-hating and an armed population of colonial settlers, distrustful of the British empire that couldn't protect them. Understanding the horrors of the Seven Years' War as experienced in the backwoods thus provides unique insights into the origins of the American republic.

Praise For Breaking The Backcountry: Seven Years War In Virginia And Pennsylvania 1754-1765…

“In gripping detail, [Ward] tells the story of a decade of devastation and settler-refugee flight produced by the war and its aftermath. . . . His engrossing writing style and crisp analysis should appeal to general readers as well as advanced history students and college professors. . . . Brings to life all the protagonists on America’s western frontier.”
--History: Reviews of New Books

“Ward ably explains life in the backcountry, the demographics of provincial armies (including a comparison of Virginia, Pennsylvania, and Massachusetts soldiers), the intricacies of Native American diplomacy, the politics of colonial government, and military actions in the Ohio Valley. Scholars interested in rural life, military and social history, and Native American studies should welcome this book.”
--Commonwealth

Matthew C. Ward is a lecturer in the department of history at the University of Dundee, Scotland.
Loading...
or support indie stores by buying on