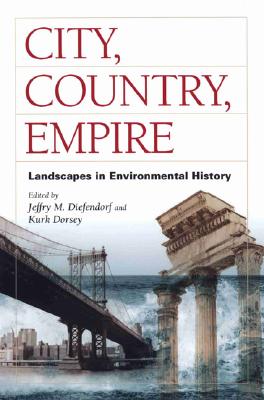 In the urgently expanding field of environmental history, two trends are emerging. Research has internationalized, crossing political and historical borders. And urban spaces are increasingly seen as part of, not apart from, the global environment. In this book, Jeffry Diefendorf and Kurk Dorsey have gathered much of the important work pushing the field in new directions. Eleven essays by prominent and regionally diverse scholars address how human and natural forces collaborate in the creation of cities, the countryside, and empires.

The Cities section features essays that examine pollution and its aftermath in Pittsburgh, the Ruhr Valley (Germany), and Los Angeles. These urban areas are far apart on the globe but closely linked in their histories of how human decision making has affected the environment.

Changing rural and suburban spaces are the focus of Countryside. Elizabeth Blackmar "follows the money" in order to understand why the financing of suburban mall developments makes local resistance difficult. Studies of the fractious history of the creation of a wildlife refuge in Oregon and the ongoing impact of hydraulic mining in the early California goldmining era emphasize the misuse of technology in rural spaces.

Such misuse is a central idea of Empires. In "When Stalin Learned to Fish," Paul R. Josephson tells the story of Soviet fishing technology designed to "harness fish to the engine of socialism." Other essays explore the failures of Western agricultural technology in Africa and the relationship between such technology and disease in European attempts to conquer the Caribbean. In a stirring, wide-ranging consideration of the neo-European colonies (the United States, Australia, Canada, and New Zealand), Thomas R. Dunlap observes the ongoing, unsettled interaction of lands and dreams. An afterword by Alfred W. Crosby, an eminent scholar of environmental history, closes the book with a broad and insightful synthesis of the history and future of this critical field.

"Anyone looking for an introduction to the growing field of environmental history will find this book an excellent choice. The essays are consistently good, and they demonstrate that the new history is changing dramatically the way we think about the past as well as helping us make better policies of the future."
--Donald Worster, Hall Distinguished Professor of American History, University of Kansas

"A fascinating and timely volume that manages to capture many of the new and emerging developments within environmental history. “
--The Public Historian

Jeffry M. Diefendorf, professor of history at the University of New Hampshire, is author of "In the Wake of War: The Reconstruction of German Cities after World War II" and coeditor of "Rebuilding Urban Japan."

Kurk Dorsey is associate professor of history at the University of New Hampshire and author of "The Dawn of Conservation Diplomacy: Canadian-American Wildlife Protection Treaties in the Progressive Era."
Loading...
or support indie stores by buying on