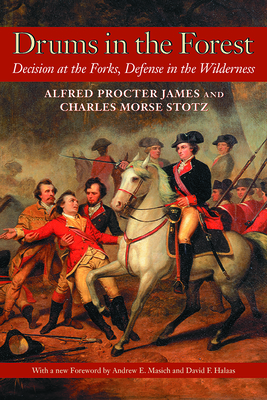 Drums In The Forest

Decision At The Forks (The Library of Western Pennsylvania History)

Originally published to commemorate the bicentennial of Pittsburgh's founding, Drums in the Forest is reissued to mark the 250th anniversary of the French and Indian War. It comprises two parts: the first, by Alfred Proctor James, provides the historical background leading up to the capture of Fort Duquesne by the British; the second, by Charles Morse Stotz, is a description of the five forts built at the forks of the Ohio between 1754 and 1815.

Praise For Drums In The Forest: Decision At The Forks (The Library of Western Pennsylvania History)…

"A fascinating portrayal of an historic period in the prenatal growth of our Republic; of the tragic drama of the passing of the Indian's way of life; of the formative phase of Washington's preparation for his future role as a Commander-in-Chief; and of the brutality, privation, hardship, peril and naked realism of frontier life in Western Pennsylvania in the mid-18th century."--Matthew B. Ridgeway, General, U.S. Army (ret.)

Dr. Alfred Procter James was professor emeritus of history, University of Pittsburgh, and author of Writings of General John Forbes and The Ohio Company--Its Inner History.

Charles Morse Stotz was a practicing architect in Pittsburgh and one of the country's foremost experts on the design of colonial forts.  His published works include The Early Architecture of Western Pennsylvania and Outposts of the War for Empire.