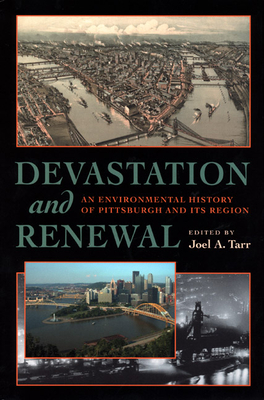 Every city has an environmental story, perhaps none so dramatic as Pittsburgh's. Founded in a river valley blessed with enormous resources-three strong waterways, abundant forests, rich seams of coal-the city experienced a century of exploitation and industrialization that degraded and obscured the natural environment to a horrific degree. Pittsburgh came to be known as “the Smoky City,” or, as James Parton famously declared in 1866, “hell with the lid taken off.”

Then came the storied Renaissance in the years following World War II, when the city's public and private elites, abetted by technological advances, came together to improve the air and renew the built environment. Equally dramatic was the sweeping deindustrialization of Pittsburgh in the 1980s, when the collapse of the steel industry brought down the smokestacks, leaving vast tracks of brownfields and riverfront. Today Pittsburgh faces unprecedented opportunities to reverse the environmental degradation of its history.

In Devastation and Renewal, scholars of the urban environment post questions that both complicate and enrich this story. Working from deep archival research, they ask not only what happened to Pittsburgh's environment, but why. What forces-economic, political, and cultural-were at work? In exploring the disturbing history of pollution in Pittsburgh, they consider not only the sooty skies, but also the poisoned rivers and creeks, the mined hills, and scarred land. Who profited and who paid for such “progress”? How did the environment Pittsburghers live in come to be, and how it can be managed for the future?

In a provocative concluding essay, Samuel P. Hays explores Pittsburgh's “environmental culture,” the attitudes and institutions that interpret a city's story and work to create change. Comparing Pittsburgh to other cities and regions, he exposes exaggerations of Pittsburgh's environmental achievement and challenges the community to make real progress for the future.

A landmark contribution to the emerging field of urban environmental history, Devastation and Renewal will be important to all students of cities, of cultures, and of the natural world.


Praise For Devastation and Renewal: An Environmental History of Pittsburgh and Its Region (Pittsburgh Hist Urban Environ)…

"Pittsburgh etches in bold relief the environmental dilemmas that confronted cities everywhere in the industrial and postindustrial eras. This book raises profound questions about how cities can best surmount the legacy of industrial production in reconstructing contemporary landscapes."
—Andrew Hurley, University of Missouri–St. Louis

"A first-rate volume that clearly explains how Pittsburgh has attempted to overcome the severe environmental pressures of industrialization in coping with land, water, and air pollution."
—Martin V. Melosi, University of Houston

"Helps us better understand how this former frontier outpost became an industrial powerhouse, and how that explosive transformation complicated human life and the landscapes on which it depended."
—Char Miller, Trinity University

Joel A. Tarr is the Richard S. Caliguiri University Professor of History and Policy at Carnegie Mellon University.
Loading...
or support indie stores by buying on