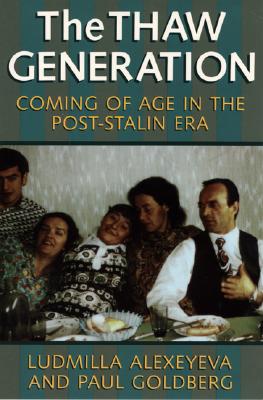 The Thaw Generation offers an insider's look at the Soviet dissident movement--the intellectuals who, during the Khrushchev and Brezhnev eras, dared to challenge an oppressive system and demand the rights guaranteed by the Soviet constitution.  Fired from their jobs, hunted by the KGB, “tried,” and imprisoned, Alexeyeva and other activists including Andrei Sakharov, Yuri Orlov, Yuli Daniel, and Andrei Sinyavsky, through their dedication and their personal and professional sacrifices, focused international attention on the issue of human rights in the USSR.

Praise For The Thaw Generation: Coming of Age in the Post-Stalin Era (Russian and East European Studies)…

“A deeply personal chronicle that offers a close and often chilling view of the Soviet dissident movement from Stalin's death in 1953 through the ascent of Gorbachev.”
--Kirkus