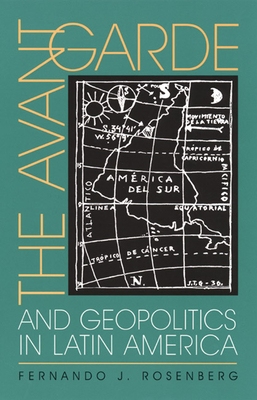 The Avant-Garde and Geopolitics in Latin America (Pitt Illuminations)

The Avant-Garde and Geopolitics in Latin America examines the canonical Latin American avant-garde texts of the 1920s and 1930s in novels, travel writing, journalism, and poetry, and presents them in a new light as formulators of modern Western culture and precursors of global culture. Particular focus is placed on the work of Roberto Arlt and Mário de Andrade as exemplars of the movement.

Fernando J. Rosenberg provides a theoretical historiography of Latin American literature and the role that modernity and avant-gardism played in it. He finds significant parallels between the cultural battles of the interwar years in Latin America and current debates over the role of the peripheral nation-state within the culture of globalization. Rosenberg establishes that the Latin American avant-garde evolved on its own terms, in polemic dialogue with the European movements, critiquing modernity itself and developing a global geopolitical awareness. In the process these writers created a bridge between postcolonial and postmodern culture, forming a distinct movement that continues its influence today.

“Rosenberg offers an inspired, necessary rereading of Latin America's avant-gardes as a self-aware negotiation with the expanding geopolitics of their time. Through agile analyses of work by key vanguard writers and in spirited dialogue with present critical debates, he also builds a compelling case for the avant-gardes' resilient import for current discussions of the global dynamics of cultural production and their anticipatory challenge to the putative modern/postmodern divide.”
--Vicky Unruh, University of Kansas

“Rosenberg's sophisticated monograph constitutes a novel approach to the Latin American avant-gardes. His interpretation of the phenomenon, which considers the avant-gardes from a global cultural vantage point, is informed by the most current scholarship in postcolonial and cultural studies. Argued with elegance and nuance, the book offers a compelling new perspective on a case of 'peripheral' modernity that will doubtless become the canonical reading of the period.”
--Carlos J. Alonso, Columbia University

Fernando J. Rosenberg is associate professor of hispanic studies and comparative literature at Brandeis University.
Loading...
or support indie stores by buying on