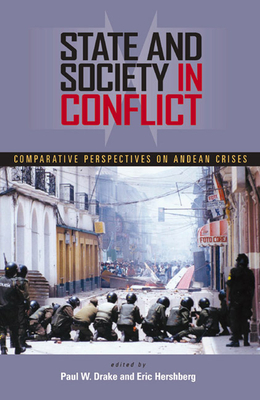 State and Society in Conflict

State and Society in Conflict analyzes one of the most volatile regions in Latin America, the Andean states of Colombia, Venezuela, Ecuador, Peru, and Bolivia.  For the last twenty-five years, crises in these five Andean countries have endangered Latin America's democracies and strained their relations with the United States. As these nations struggle to cope with demands from Washington on security policies (emphasizing drugs and terrorism), neoliberal economics, and democratic politics, their resulting domestic travails can be seen in poor economic growth, unequal wealth distribution, mounting social unrest, and escalating political instability.

The contributors to this volume examine the histories, politics, and cultures of the Andean nations, and argue that, due to their shared history and modern circumstances, these countries are suffering a shared crisis of deteriorating relations between state and society that is best understood in regional, not purely national, terms.  The results, in some cases, have been semi-authoritarian hybrid regimes that lurch from crisis to crisis, often controlled through force, though clinging to a notion of democracy. The solution to these problems--whether through democratic, authoritarian, peaceful, or violent means--will have profound implications for the region and its future relations with the world.

“Scholars and students alike will benefit from this uniformly rich set of essays by leading social scientists working on the Andean region. The volume provides both the analytical tools and historical and contemporary perspectives necessary to enable a deeper understanding of the common elements of crisis, significant variations, and potential trajectories in state-society relations across the Andes today.”
--Jonathan Hartlyn, University of North Carolina at Chapel Hill

“An excellent provocative volume which should have wide appeal.”
—European Review of Latin American and Caribbean Studies

Paul W. Drake is Distinguished Professor of Political Science and dean of the Division of Social Sciences at University of California, San Diego. A past president of the Latin American Studies Association, he is also is the coeditor of numerous books, including The Origins of Liberty, El APRA, de la ideología a la praxis, and The Struggle for Democracy in Chile.

Eric Hershberg is senior advisor of the Social Science Research Council in New York City. He is adjunct professor at Columbia University, School of International and Public Affairs, and has served as chair on the board of directors of the North American Congress on Latin America since 1999. Hershberg is president-elect of the Latin American Studies Association.