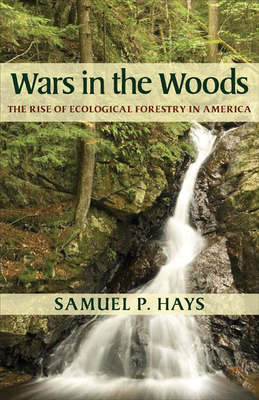 Wars in the Woods

The Rise of Ecological Forestry in America

Wars in the Woods examines the conflicts that have developed over the preservation of forests in America, and how government agencies and advocacy groups have influenced the management of forests and their resources for more than a century. Samuel Hays provides an astute analysis of manipulations of conservation law that have touched off a battle between what he terms “ecological forestry” and “commodity forestry.” Hays also reveals the pervading influence of the wood products industry, and the training of U.S. Forest Service to value tree species marketable as wood products, as the primary forces behind forestry policy since the Forest Management Act of 1897.

Wars in the Woods gives a comprehensive account of the many grassroots and scientific organizations that have emerged since then to combat the lumber industry and other special interest groups and work to promote legislation to protect forests, parks, and wildlife habitats. It also offers a review of current forestry practices, citing the recent Federal easing of protections as a challenge to the progress made in the last third of the twentieth century.

Hays describes an increased focus on ecological forestry in areas such as biodiversity, wildlife habitat, structural diversity, soil conservation, watershed management, native forests, and old growth. He provides a valuable framework for the critical assessment of forest management policies and the future study and protection of forest resources.


Praise For Wars in the Woods: The Rise of Ecological Forestry in America…

"The book's most important contribution is its comprehensive and critical portrayal of interactions among political actors in forest policy making and management at federal and state levels. A critical, hard-hitting, and feisty book."
--Journal of Forestry

"Samuel P. Hays is one of the founders of conservation history. This work maintains his high standard of scholarship while presenting a history of a previously unexamined area, ecological forestry."
--Journal of the West

Samuel P. Hays is University Professor Emeritus of History at the University of Pittsburgh.
Loading...
or
Not Currently Available for Direct Purchase