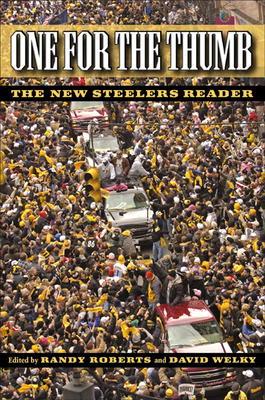 One for the Thumb (Paperback)

The New Steelers Reader (The Library of Pittsburgh Sports History)

On February 5, 2006, the Pittsburgh Steelers joined the ranks of the elite teams in National Football League history, celebrating their fifth Super Bowl victory. From an unspectacular 7-5 start, to completing the greatest playoff run ever, to the fairy tale ending of Jerome Bettis's Hall of Fame career and the vindication of Bill Cowher's coaching tenure, the 2005 season was not only one for the thumb, but “truly one for the ages.”

One for the Thumb is a collection of the best writing about the fabled franchise by local and national sportswriters, and former players. It covers the team's history from Art Rooney Sr.'s purchase of the NFL franchise in 1933 for $2,500 to their Super Bowl XL victory. From their frustrating early days as the Pirates, Steagles, and Card-Pitts, through their four Super Bowl wins in the 1970s, to the fateful day in 2004 when they selected Ben Roethlisberger as the eleventh overall pick in the draft, One for the Thumb captures the essence of the team whose identity is forever linked with the spirit of the hardworking, blue-collar city it represents.

From immortals Bobby Layne, Ernie Stautner, and John Henry Johnson, to Chuck Noll, Terry Bradshaw, Mean Joe Greene, Rocky Bleier, and Neil O'Donnell, to current greats Troy Polamalu, Jerome Bettis, Ben Roethlisberger, and Bill Cowher, One for the Thumb is the definitive anthology of the Pittsburgh Steelers--a must-read for all fans of the team and the game of football.

Randy Roberts, professor of history at Purdue University, is the author or editor of fourteen books, including Pittsburgh Sports: Stories from the Steel City. He is the recipient of the Ray and Pat Browne Award from the Popular Culture Association.
David Welky is assistant professor of history at University of Central Arkansas. He is coeditor, with Randy Roberts, of Charles A. Lindbergh: The Power and Peril of Celebrity, 1927-1941.

Praise For One for the Thumb: The New Steelers Reader (The Library of Pittsburgh Sports History)…

“An excellent publication all fans of the Steelers must read.”
--Dan Rooney

“A touchdown! This book is sure to touch the heart and soul of every Pittsburgh Steelers fan. Highly recommended reading.”
--Franco Harris

“Fantastic, filled with articles written by people who were fascinated with the players and understood the aspects of the game . . . interesting for the die-hard fan and the casual observer alike, giving a complete picture of the Steelers and their impact on Pittsburgh sports, from their less-than-memorable moments to their greatest achievements.”
--Pittsburgh City Paper
or support indie stores by buying on
Copyright © 2020 American Booksellers Association