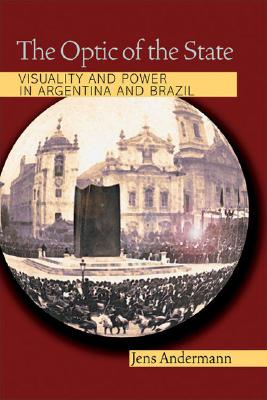 The Optic of the State

Visuality and Power in Argentina and Brazil (Illuminations: Cultural Formations of the Americas)

The Optic of the State traces the production of nationalist imaginaries through the public visual representation of modern state formation in Brazil and Argentina. As Jens Andermann reveals, the foundational visions of national heritage, territory, and social and ethnic composition were conceived and implemented, but also disputed and contested, in a complex interplay between government, cultural, and scientific institutions and actors, as a means of propagating political agendas and power throughout the emerging states. The purpose of these imaginaries was to vindicate the political upheavals of the recent past and secure the viability of the newly independent states through a sense of historic destiny and inevitable evolution. The careful presentation of artifacts and spectacles was also aimed abroad in order to win the favor of European imperial powers and thereby acquire a competitive place in the nascent global economy of the late nineteenth century.
The Optic of the State offers a fascinating critique of the visual aspects of national mythology. It exposes how scientific and cultural institutions inscribed the state-form in time and space, thus presenting historical processes as natural "givens.

Praise For The Optic of the State: Visuality and Power in Argentina and Brazil (Illuminations: Cultural Formations of the Americas)…

“As Andermann affirms in his brilliant study on the uses of visual cultures as state policy in Argentina and Brazil at the end of nineteenth century, maps, archives, and museums work a 'civilized' visuality on the 'bare life' of local cultures. This history of violence reveals how the technological gaze colonizes spaces and everyday practices, and reactivates the instruments of imperial capital.”
--Graciela Montaldo, Columbia University


"This study is particularly useful in understanding how some of the more gruesome moments in history came to feel 'given,' and because it opens so many lines of inquiry about power and visuality, Andermann's work will be thoroughly appreciated by those with a basic background in current debates in cultural studies."
--International Studies Review

Jens Andermann is reader in Latin American and Luso-Brazilian Studies at Birkbeck College, University of London. He is the coeditor of Images of Power: Iconography, Culture and the State in Latin America.
Loading...
or
Not Currently Available for Direct Purchase