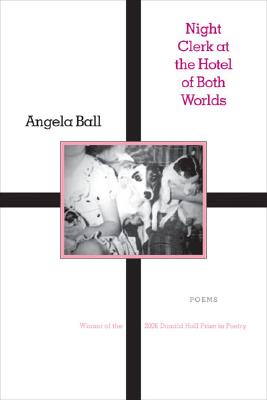 Night Clerk at the Hotel of Both Worlds (Pitt Poetry)

Winner of the 2006 Donald Hall Prize in Poetry. Angela Ball's lyrical, wry, and rueful poems float on a river of incongruities on which we may find Ron Popeil, Lord Byron, and Rudyard Kipling sharing the same raft; they create a fascinating commerce between the sublime and the ridiculous.

"Ball gives her reader a world as complex as its characters, as challenging as the dichotomies humans create. Ball brings energy and humor to subject matter that is both complex and trivial, making Night Clerk at the Hotel of Both Worlds a book worth sleeping in."
--Crab Orchard Review

”Navigates nimbly between narrative and language and mapping the bright territory in which imagination suffuses the mundane. Droll, allusive, plaintive in an ironic pitch, Ball’s lyrics defy reader expectations as they develop, dodging and burning to create vibrant sound patches and images.”
—The Hollins Critic

Angela Ball is professor of English in the Center for Writers at the University of Southern Mississippi and poetry editor for Mississippi Review. She is the author of four previous poetry collections, including The Museum of the Revolution: 58 Exhibits, Possession, and Quartet, as well as two chapbooks. She is the recipient of grants from the Mississippi Arts Commission and the NEA, and is a former poet-in-residence at the University of Richmond. Her work has appeared in the New Yorker, Ploughshares, the New Republic, Poetry, and Best American Poetry 2001, among other publications.
Loading...
or
Not Currently Available for Direct Purchase