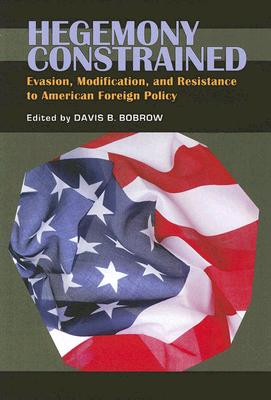 By Davis B. Bobrow (Editor)

In the post-cold war era, the United States has risen to a position of unprecedented dominance in the world and has often pursued a primarily unilateral approach to international policy issues. "Hegemony Constrained" examines how nations, ethnic and religious groups, and international organizations cope with American hegemony. The chapters reveal the various ways in which foreign actors attempt and sometimes succeed in keeping official Washington from achieving its preferred outcomes.
An international group of contributors considers how and why a variety of foreigners act strategically to avoid, delay, or change American policy with respect to a broad range of issues in world affairs. Individual chapters analyze the Kurds and Shia in Iraq; the governments of China, Japan, Turkey, and Germany; the G-7; liberalizing the international economy; coping with global warming; regulating harmful tax competition; controlling missile proliferation; limiting public health damage from tobacco; and international public opinion bearing on the politics of responding to a hegemonic America.
By recognizing and illustrating moves that challenge American unilateralism, "Hegemony Constrained" provides a framework for understanding and anticipating the goals, motives, and means others in the world bring to their dealings with American hegemony in specific situations. Thus, it offers a corrective to naively optimistic unilateralism and naively optimistic multilateralism.

Davis B. Bobrow is professor (emeritus) of public and international affairs and political science at the University of Pittsburgh. He is coauthor of "Defensive Internationalism, Policy Analysis by Design," and "Understanding Foreign Policy Decisions." Bobrow has served as president of the International Studies Association and is a former member of the U.S. Defense Science Board.

“Realists say states must balance or bandwagon to cope with a dominant power. Sophisticated observers of international relations-and Bobrow is certainly among them-know that there are a range of strategies open to such states. His book identifies these strategies, tells us when they are chosen, supports its claims with good evidence, and provides the most insightful analysis to date of relations between the U.S. and other powers.”
—Richard Ned Lebow, Dartmouth College

“This volume seeks to explain why recent American foreign policy has so often been resisted in much of the world, not with the usual realist reference to 'balancing' behavior, but rather by the international response to specific U.S. policies pursued, often unilaterally, in distinct policy arenas. Opposition thus arises not to U.S. hegemony per se, but rather to the heavy-handed way in which U.S. 'leadership' is so often exercised. The authors argue for a varied and nuanced policy response by the U.S. to those states that appear to resist U.S. leadership, tailored to meet the needs of specific bilateral and multilateral relationships according to the particular nature of the policy arena at stake.”
—P. Terrence Hopmann, Brown University