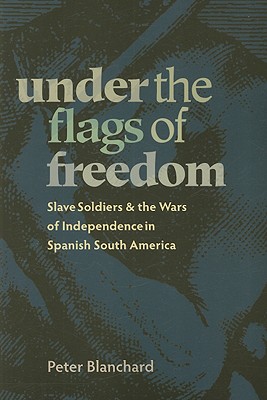 Under the Flags of Freedom (Paperback)

During the wars for independence in Spanish South America (1808-1826), thousands of slaves enlisted under the promise of personal freedom and, in some cases, freedom for other family members. Blacks were recruited by opposing sides in these conflicts and their loyalties rested with whomever they believed would emerge victorious. The prospect of freedom was worth risking one's life for, and wars against Spain presented unprecedented opportunities to attain it.

Much hedging over the slavery issue continued, however, even after the patriots came to power. The prospect of abolition threatened existing political, economic, and social structures, and the new leaders would not encroach upon what were still considered the property rights of powerful slave owners. The patriots attacked the institution of slavery in their rhetoric, yet maintained the status quo in the new nations. It was not until a generation later that slavery would be declared illegal in all of Spain's former mainland colonies.

Through extensive archival research, Blanchard assembles an accessible, comprehensive, and broadly based study to investigate this issue from the perspectives of Royalists, patriots, and slaves. He examines the wartime political, ideological, and social dynamics that led to slave recruitment, and the subsequent repercussions in the immediate postindependence era. Under the Flags of Freedom sheds new light on the vital contribution of slaves to the wars for Latin American independence, which, up until now, has been largely ignored in the histories and collective memories of these nations.

Peter Blanchard is professor of history at the University of Toronto. He is the author of The Origins of the Peruvian Labor Movement, 1883-1919 and Slavery and Abolition in Early Republican Peru.

Praise For Under the Flags of Freedom: Slave Soldiers and the Wars of Independence in Spanish South America (Pitt Latin American Series)…

“Under the Flags of Freedom is essential reading for historians of Latin American slavery and independence movements. Peter Blanchard convincingly demonstrates that the Spanish American revolutions undermined slavery in South America; at the same time, war gave enslaved persons the openings to fight for their freedom. Yet despite the new opportunities to claim freedom, the dismantling of slavery was protracted, conflictive, and uncertain. Blanchard brings to light the numerous conflicts over slavery and freedom that shaped the era's broader struggle for emancipation and independence.”
—Christopher Schmidt-Nowara, Fordham University

“An outstanding study that sheds new light upon the wars of Independence in South America.”
—Military History

”Impressively researched. Blanchard certainly achieves his goal of ensuring that slaves are given their proper due for securing Spanish America’s independence; his book is a fine resource for both students of Spanish America’s independence struggle and scholars interested in the process of abolition in the Atlantic World.”
—American Historical Review

“The subject matter is fascinating, and the research impressive, giving grounds for optimism that we can still go deeper into the exploration of the black experience in nineteenth-century South America.”
—Bulletin of Spanish Studies