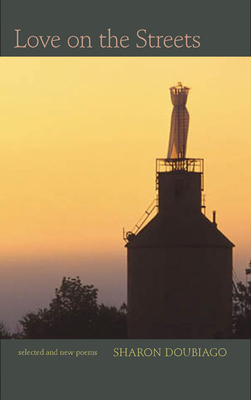 Love on the Streets (Paperback)

Love on the Streets is a selection from two of Doubiago's book-length poems, Hard Country and South America Mi Hija and from the collections Psyche Drives the Coast and Body and Soul, plus new poems. Hard Country takes place in 1976, on a journey across the U.S. with a lover, climaxing on the lake where his mother drowned herself when he was ten. South America Mi Hija is a journey the poet made with her 15 year-old daughter to Colombia, Ecuador and Peru. Psyche Drives the Coast are poems written while Doubiago lived mainly on the road, and in diverse, passionate communities of poets from Mendocino to the Canadian border. Body and Soul was written while she was a resident of Oregon, and the new poems are written from her present home in San Francisco.

Sharon Doubiago is the author of three book-length poems: South America Mi Hija; The Husband Arcane: The Arcane of O; and Hard Country. Her poetry collections include: Psyche Drives the Coast: Poems, 1975-1987; Body & Soul; and Greatest Hits, 1976-2003.  Doubiago is also the author of two short story collections: The Book of Seeing With One's Own Eyes and El Niño. She is the recipient of three Pushcart Prizes and has twice been nominated for the National Book Award.

Praise For Love on the Streets: Selected and New Poems (Pitt Poetry Series)…

“These are poems about love: the love between two people, the love of one’s country, and love of the very land, among other tributes. . . .It’s rare to find such earnest poems about love that are so finely sculpted.”
--Feminist Review

“From the meanest of streets to the most ivory of towers, Sharon Doubiago has been knocking on our doors with an insistent and consistent voice for decades. This new selection of Doubiago’s poems puts the best of her work between one set of covers along with mold-breaking new poems.”
--Rain Taxi

“Sharon Doubiago's Love on the Streets brings together evidence of her power that feels raw but is carefully honed, her rootedness in the American land and experience, her strong female voice. These are poems with real bite. They will move you if you let them.”
—Marge Piercy
or
Not Currently Available for Direct Purchase
Copyright © 2020 American Booksellers Association