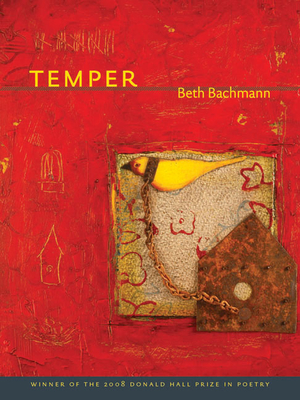 Temper is at once violent and controlled, unflinching and unforgiving in temperament. The poems are mercilessly recursive, placing pressure on the lyric as a mode of both the elegiac and the ecstatic. The result is an enforced silence, urgent with grief.

“The difficulties of making art about violence might have churned the poems into melodrama or diffused them into abstraction, but Bachmann’s temperate approach yields work that is eerily calm and anything but bloodless. Tough and impressive, ‘Temper’ leaves its mark.”
—The Georgia Review

"Here we have metamorphosis, resonance, transfromation, the alchemy of art. Bachmann is able by a few simple direct gestures . . . to connect her personal grief and tragedy to the whole tradition of English (and Western) verse and to the poetic impulse itself to make beauty out of sorrow."
—Poetry

“A thorough and vivid emotional narrative, taking the reader to an unsettling depth of personal tragedy at breakneck speed.”
—Oxford American

“In her lush economies, psychic darkness, and imperative forthrightness, Bachmann is clearly an heir of Louise Glück  and there’s a trace of Whitman here, too . . .  The grief in ‘Temper’ is raw, relentless, and unadorned; in the crucible of Bachmann’s sensibility, this sorry becomes gracious force.”
—On the Seawall

“Nothing short of a stunning debut. Rarely have I felt so compelled by a collection, so utterly incapable of turning away. “
—Poet Lore

“Bachmann is able—by a few simple, direct gestures toward pastoral elegy, invoking nymphs and shepherds by rejecting them—to connect her personal grief and tragedy to the whole tradition of English (and Western) verse and to the poetic impulse itself to make beauty out of sorrow.”
—Poetry

Beth Bachmann teaches creative writing at Vanderbilt University. Her poems have appeared in American Poetry Review, Ploughshares, Prairie Schooner, Black Warrior Review, Kenyon Review, Southern Review, and Tin House, among others. Bachmann's work has been honored with a grant from the Tennessee Arts Commission and has been anthologized in Alice Redux and Best New Poets 2005 and 2007.
or support indie stores by buying on