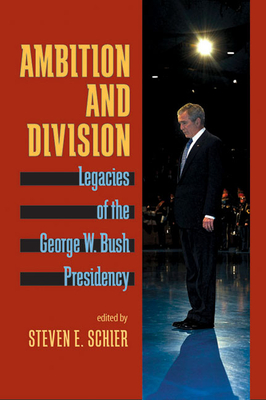 The presidency of George W. Bush is notable for the grand scale of its ambitions, the controversy that these ambitions generated, and the risks he regularly courted in the spheres of politics, economics, and foreign policy.  Bush's ultimate goal was indeed ambitious: the completion of the conservative “regime change” first heralded by the election of Ronald Reagan in 1980.  But ironically this effort sewed the very discord that ultimately took root and emerged to frustrate Bush's plans, and may even have begun to unravel aspects of the Reagan revolution he sought to institutionalize.
Politically, the Bush White House sought the entrenchment of consistent Republican electoral majorities.  Institutionally, the Bush administration sought to preserve control of Congress by maintaining reliable partisan Republican majorities, and to influence the federal courts with a steady stream of conservative judicial appointees.  The administration also sought increased autonomy over the executive branch by the aggressive use of executive orders and bureaucratic reorganizations in response to 9/11.
Many of these efforts were at least partially successful.  But ultimately the fate of the Bush presidency was tied to its greatest single gamble, the Iraq War.  The flawed prosecution of that conflict, combined with other White House management failures and finally a slumping economy, left Bush and the Republican Party deeply unpopular and the victim of strong electoral reversals in 2006 and the election victory of Barack Obama in 2008.  The American public had turned against the Bush agenda in great part because of the negative outcomes resulting from the administration's pursuit of that agenda.
This book assembles prominent presidential scholars to measure the trajectory of Bush's aspirations, his accomplishments, and his failures. By examining presidential leadership, popular politics and policymaking in this context, the contributors begin the work of understanding the unique historical legacy of the Bush presidency.

Steven E. Schier is Dorothy H. and Edward C. Congdon Professor of Political Science at Carleton College. He is author or coauthor of several books including You Call This an Election?: America's Peculiar Democracy, and editor of High Risk and Big Ambition: The Early Presidency of George W. Bush; and The Postmodern Presidency: Bill Clinton's Legacy in U.S. Politics.

Praise For Ambition and Division: Legacies of the George W. Bush Presidency…

“Rarely has a presidency been as consequential as George W. Bush's. This volume takes the reader through the dramatic and significant changes--for better or worse- America and the world went through as a consequence of the actions of the Bush administration. It is essential reading for those who wish to understand just how much changed in those turbulent years.”
—Michael A. Genovese, Loyola Marymount University

“This is an unusually ambitious and coherent volume. It traces the central paradox of the Bush presidency--audacious aspirations and white-knuckled risk taking to solidify the conservative regime that generated gut wrenching policy failures and stunning political defeats. This remarkable volume dissects the limits and vulnerabilities of not only the Bush presidency but of the American presidency in the early twenty-first century. It offers cogent warnings to the Obama presidency, which may have politically benefited from the Bush failures but may ultimately fall victim to similar temptations to over-reach.”
—Lawrence R. Jacobs, University of Minnesota
or
Not Currently Available for Direct Purchase
Copyright © 2020 American Booksellers Association