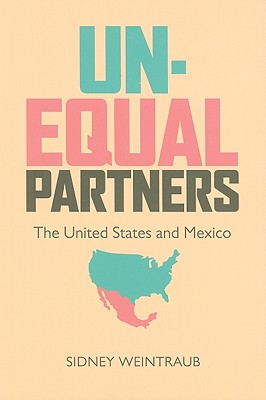 Since Mexico’s defeat in the Mexican-American War of the 1840s, the United States has continued to dominate Mexico economically, militarily, and politically. This long history of asymmetry has created a Mexican distaste for “American arrogance,” and an American vision of Mexico as its “backyard.” The imbalance has damaged political negotiations, trade pacts, and capital flows, as suspicions and protectionism have undermined diplomacy. Despite these events, the two nations remain joined at the hip: more than 80 percent of Mexico’s exports are to the United States, and the majority of foreign investment in Mexico comes from America.

In Unequal Partners, Sidney Weintraubexamines the current relationship of Mexico and the United States as one of sustained dependence and dominance. The chapters examine the consequences of this imbalance in six major policy areas: trade; investment and finance; narcotics; energy; migration; and the border.  The book begins in 1954 when the Mexican “growth miracle” was at its apex, and proceeds to the present. Special attention is paid to the post-1982 debt crisis era, when Mexico began a more outward-looking trade policy.

As this study reveals, Mexico has often been its own worst enemy in foreign relations. Over the past thirty years, the country has been plagued by debt, currency fluctuations, tax collection problems, political corruption, and state-controlled business monopolies that block foreign investment and importation. These factors have created an environment of instability, damaged outside perceptions, and weakened Mexico’s bargaining position.

Weintraub considers future policy changes that would help Mexico to level the playing field. Improving the education system, he argues, will benefit nearly every other activity and institution, and opening the oil market to private investment and technology will help develop deep-water drilling and revitalize this significant export commodity. In foreign relations, Mexico must be assertive—as it has been in easing U.S. restrictions on goods traded through NAFTA, and demanding U.S. aid to fight drug cartels—not passive, as it currently is on U.S. anti-immigration policy and the proposed border wall. Perhaps most importantly, the study points to the deeper development of policies that are proactive and outward looking.

“Weintraub explores the intricacies of a relationship that is both intense and asymmetrical. He provides evidence that it is not easy to manage the relationship between these two countries, but by looking at past experience, he suggests ways that both can be far more effective in doing so. The lessons will be extremely important to scholars and policymakers in both countries and to anyone concerned about how developing and developed countries can manage complex but unequal relationships more effectively.”
—Andrew Selee, Director, Mexico Institute, Woodrow Wilson Center

“Weintraub, a leading scholar of Mexico, again produces a great book dealing with the dependent-dominant relationship of Mexico and the US and the policy initiatives of both countries.”
—Choice

“Weintraub, the dean of Mexican studies, has once again delivered a book that diagnoses the disease that infects the relationship and prescribes medicine to heal the two patients. His purpose is to introduce more balance into the relationship, and one hopes that Americans and Mexicans read this book and contribute to that goal.”
—The Americas

Sidney Weintraub holds the William E. Simon Chair in Political Economy at the Center for Strategic and International Studies. He is also professor emeritus at the Lyndon B. Johnson School of Public Affairs at the University of Texas at Austin. Weintraub is the author of numerous books, including Energy Cooperation in the Western Hemisphere: Benefits and Impediments;NAFTA’s Impact on North America: The First Decade; and Financial Decision-Making in Mexico: To Bet a Nation.
Loading...
or support indie stores by buying on