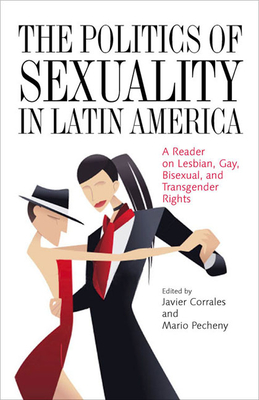 The Politics of Sexuality in Latin America

The city of Buenos Aires has guaranteed all couples, regardless of gender, the right to register civil unions. Mexico City has approved the Cohabitation Law, which grants same-sex couples marital rights identical to those of common-law relationships between men and women. Yet, a gay man was murdered every two days in Latin America in 2005, and Brazil recently led the world in homophobic murders. These facts illustrate the wide disparity in the treatment and rights of lesbian, gay, bisexual, and transgender (LGBT) populations across the region.

The Politics of Sexuality in Latin America presents the first English-language reader on LGBT politics in Latin America. Representing a range of contemporary works by scholars, activists, analysts, and politicians, the chapters address LGBT issues in nations from Cuba to Argentina. In their many findings, two main themes emerge: the struggle for LGBT rights has made significant inroads in the first decade of the twenty-first century (though not in every domain or every region); and the advances made were slow in coming compared to other social movements.

The articles uncover the many obstacles that LGBT activists face in establishing new laws and breaking down societal barriers. They identify perhaps the greatest roadblock in Latin American culture as an omnipresent system of “heteronormativity,” wherein heterosexuality, patriarchalism, gender hierarchies, and economic structures are deeply rooted in nearly every level of society. Along these lines, the texts explore specific impediments including family dependence, lack of public spaces, job opportunities, religious dictums, personal security, the complicated relationship between leftist political parties and LGBT movements in the region, and the ever-present “closets,” which keep LGBT issues out of the public eye.

The volume also looks to the future of LGBT activism in Latin America in areas such as globalization, changing demographics, the role of NGOs, and the rise of economic levels and education across societies, which may aid in a greater awareness of LGBT politics and issues. As the editors posit, to be democratic in the truest sense of the word, nations must recognize and address all segments of their populations.

Praise For The Politics of Sexuality in Latin America: A Reader on Lesbian, Gay, Bisexual, and Transgender Rights (Pitt Latin American Series)…

“This collection, with its focus on the development of political rights in Latin America, makes an important contribution to the growing field of LBGT studies in Latin America.  It is sure to become a valuable addition to the classroom for courses dealing with the history of gender and sexuality in Latin America.”
—Martin A. Nesvig, University of Miami

“Finally we have a comprehensive book that bridges the gap between the academic and non-academic literature on the politics of LGBT movements in Latin America. Corrales and Pecheny’s The Politics of Sexuality in Latin America is destined to become the main reference for any serious scholar interested in teaching or researching the comparative politics of human rights and sexuality in the region.”
—Ernesto Calvo, University of Houston

“Any scholar interested in a wide overview of the subject—a subject too long neglected by academics—would find much of value in this superb collection.”
—DRCLAS Review

“This reader provides an exceptionally wide selection of articles, documenting current lesbian, gay, bisexual, and transgender (LGBT) politics in over twelve different Latin American countries. It addresses the achievements regarding LGBT rights in the region, but also the remaining challenges, attempting to shed light on why in some domains, regions, and countries there has been little progress, and investigating what the particular resistances against human rights of the LGBT communities and their social recognition are grounded in.”
—Bulletin of Latin American Research

"A particularly timely and, indeed, a pioneering contribution to the rapidly expanding literature on non-heteronormative sexualities in Latin America. The volume's focus on the politics of sexual identity sets it apart from the earlier literature by U.S.-based Latin Americanist scholars, which focused on the formation of sexual identity itself. . . Noteworthy for the prominence accorded lesbians and transgendered people, a reflection of the editors' commitment to topical, regional and disciplinary inclusivity. . .  The sixth section, 'Diversities Within,' is the most path breaking. It addresses the competing goals and interests that coexist, often uncomfortably, within the LGBT movement. . . Represents a trailblazing contribution to the study of same-sex sexuality in Latin America."
—H-Net Reviews

Javier Corrales is associate professor of political science at Amherst College. He is the author of Presidents without Parties: The Politics of Economic Reform in Argentina and Venezuela in the 1990s.
Loading...
or support indie stores by buying on