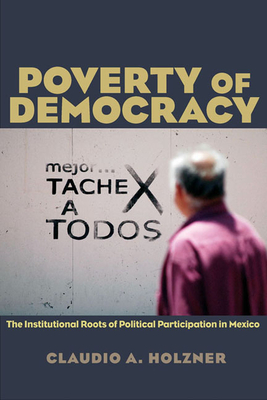 Political participation rates have declined steadily in Mexico since the 1990s. The decline has been most severe among the poor, producing a stratified pattern that more and more mirrors Mexico’s severe socioeconomic inequalities. Poverty of Democracy examines the political marginalization of Mexico’s poor despite their key role in the struggle for democracy.
Claudio A. Holzner uses case study evidence drawn from eight years of fieldwork in Oaxaca, and from national surveys to show how the institutionalization of a free-market democracy created a political system that discourages the political participation of Mexico’s poor by limiting their access to politicians at the local and national level. Though clean elections bolster political activity, Holzner shows that at the local level, and particularly in Mexico’s poorest regions, deeply rooted enclaves of authoritarianism and clientelism still constrict people’s political opportunities.

To explain this phenomenon, Holzner develops an institutional theory in which party systems, state-society linkages, and public policies are the key determinants of citizen political activity. These institutions shape patterns of political participation by conferring and distributing resources, motivating or discouraging an interest in politics, and by affecting the incentives citizens from different income groups have for targeting the state with political activity.

Holzner’s study sheds light on a disturbing trend in Latin America (and globally), in which neoliberal systems exacerbate political and economic disparities and create institutions that translate economic inequalities into political ones.

“Holzner has crafted a challenging, thoughtful, and provocative interpretation contradicting theories that suggest democracy increases political participation among the poor. This work is particularly relevant to Mexico, but Holzner’s conclusions have widespread implications for any society completing the transition to a democratic model. A welcome, fresh insight to the consequences of democratic transitions in the region.”
—Roderic Ai Camp, Claremont McKenna College

“An excellent study of the paradoxical decline in political participation among Mexico’s poor in the wake of democratization and decentralization. The author combines qualitative and quantitative methods in a clear and accessible way, and the interview data is especially rich and illuminating.”
—Katrina Burgess, Tufts University

Claudio A. Holzner is associate professor of political science at the University of Utah.