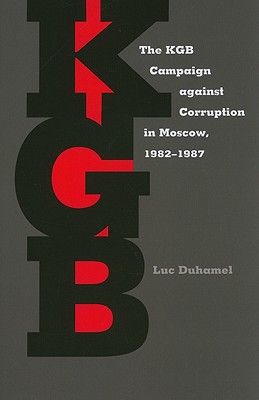 The KGB Campaign against Corruption in Moscow, 1982–1987 (Russian and East European Studies) (Paperback)

The 1980s brought a whirlwind of change to Communist Party politics and the Soviet Republic. By mid-decade, Gorbachev’s policies of perestroika and glasnost had opened the door to democratic reform. Later, mounting public unrest over the failed economy and calls for independence among many republics ended with the dissolution of the Soviet Union in 1991. Often overlooked in these events, yet monumental to breaking the Communist Party’s institutional stranglehold, were the KGB anti-corruption campaigns of 1982–1987.

Inthis original study,Luc Duhamel examines the KGB at its pinnacle of power. The appointment of former KGB director Yuri Andropov as general secretary of the Communist Party in 1982 marked the height of KGB influence. For the first time since Stalin, Beria, and the NKVD, there was now an unquestioned authority to pursue violators of Soviet law, including members of the Communist Party. Duhamel focuses on the KGB’s investigation into Moscow’s two largest trade organizations: the Chief Administration of Trade and the Administration of the Moscow Fruit and Vegetable Office. Like many of their Soviet counterparts, these state-controlled institutions were built on a foundation of bribery and favoritism among Communist Party members, workers, and their bosses. This book analyzes the multifarious networks of influence peddling, appointments, and clientelism that pervaded these trade organizations and maintained their ties to party officials.

Through firsthand research into the archives of the Andropov-era KGB and the prosecutor general’s office, Duhamel uncovers the indictment of thousands of trade organization employees, the reprimand of Communist Party members, and the radical change in political ideology manifested by these proceedings. He further reveals that despite aggressive prosecutions, the KGB’s power would soon wither, as the agency came under intense scrutiny because of its violent methods and the ghosts of the NKVD. The reinstatement of Moscow city government control over the trade organizations, the death of Andropov, and the rising tide of democratic reform would effectively end the reign of the KGB and its anticorruption campaigns.

Luc Duhamel is associate professor of political science at the University of Montreal.

Praise For The KGB Campaign against Corruption in Moscow, 1982–1987 (Russian and East European Studies)…

“Sheds light on an important and hitherto largely overlooked phenomenon: the crackdown on corruption in Moscow’s trade bureaucracy and how that might have fed directly into the political developments that led to the collapse of the USSR.”
—Peter Rutland, Wesleyan University

“An important and compelling case that the Soviet system, while principally different from those of Western societies, created its own formal and informal structure of incentives for rational decision making.”
—Andrei Tsygankov, San Francisco State University

“Riveting. At multiple levels, this work provides new information and perspectives on a period of stalemate, factional competition, and the initiation of fundamental political and economic change.”
—H-Net Reviews