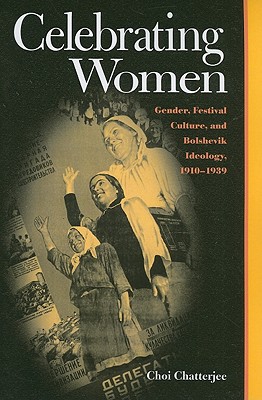 The first International Women’s Day was celebrated in Copenhagen in 1910 and adopted by the Bolsheviks in 1913 as a means to popularize their political program among factory women in Russia. By 1918, Women’s Day had joined May Day and the anniversary of the October Revolution as the most important national holidays on the calendar.

Choi Chatterjee analyzes both Bolshevik attitudes towards women and invented state rituals surrounding Women’s Day in Russia and the early Soviet Union to demonstrate the ways in which these celebrations were a strategic form of cultural practice that marked the distinctiveness of Soviet civilization, legitimized the Soviet mission for women, and articulated the Soviet construction of gender. Unlike previous scholars who have criticized the Bolsheviks’ for repudiating their initial commitment to Marxist feminism, Chatterjee has discovered considerable continuity in the way that they imagined the ideal woman and her role in a communist society.

Through the years, Women’s Day celebrations temporarily empowered women as they sang revolutionary songs, acted as strong protagonists in plays, and marched in processions carrying slogans about gender equality. In speeches, state policies, reports, historical sketches, plays, cartoons, and short stories, the passive Russian woman was transformed into an iconic Soviet Woman, one who could survive, improvise, and prevail over the most challenging of circumstances.

“Extremely well researched. . . . Adds a great deal to our understanding of the cultural history of Russia from the immediate prerevolutionary period through the 1930s.”
—American Historical Review

“Chatterjee’s laudably eclectic approach to International Women’s Day allows her to paint a vivid picture of the opportunism that motivated the incorporation of IWD into the Soviet calendar. . . . Successfully illustrates the emblematic nature of IWD as an instance of early Soviet culture . . . will find an enthusiastic readership among those interested in the history of feminism in Russia, as well as those looking for a broader understanding of women’s role in Russian revolutionary culture.”
—Russian Review

“This innovative book examines the contradictory promises the Soviet state made to women.  Examining a wide-range of media, from theater to cartoons, Choi Chatterjee makes a compelling case for distinctive form of Soviet modernity embodied in the new Soviet woman.”
—Lynn Mally, University of California, Irvine
or
Not Currently Available for Direct Purchase
Copyright © 2020 American Booksellers Association