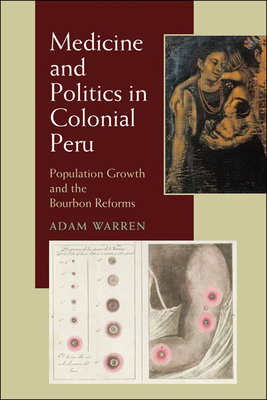 Medicine and Politics in Colonial Peru

By the end of the eighteenth century, Peru had witnessed the decline of its once-thriving silver industry, and it had barely begun to recover from massive population losses due to smallpox and other diseases. At the time, it was widely believed that economic salvation was contingent upon increasing the labor force and maintaining as many healthy workers as possible. In Medicine and Politics in Colonial Peru,Adam Warrenpresents a groundbreaking study of the primacy placed on medical care to generate population growth during this era.

The Bourbon reforms of the eighteenth century shaped many of the political, economic, and social interests of Spain and its colonies. In Peru, local elites saw the reforms as an opportunity to positively transform society and its conceptions of medicine and medical institutions in the name of the Crown. Creole physicians in particular, took advantage of Bourbon reforms to wrest control of medical treatment away from the Catholic Church, establish their own medical expertise, and create a new, secular medical culture. They asserted their new influence by treating smallpox and leprosy, by reforming medical education, and by introducing hygienic routines into local funeral rites, among other practices.

Later, during the early years of independence, government officials began to usurp the power of physicians and shifted control of medical care back to the church. Creole doctors, without the support of the empire, lost much of their influence, and medical reforms ground to a halt.  As Warren’s study reveals, despite falling in and out of political favor, Bourbon reforms and creole physicians were instrumental to the founding of modern medicine in Peru, and their influence can still be felt today.

“The book’s clearly written narratives and engaging detail make it a good choice for both undergraduate and graduate courses in colonial Latin America and the history of medicine.”
—Hispanic American Historical Review

“A welcome study . . . rich in detail and a valuable addition to the field for its insight into the practice of medicine as an outworking of, and response to, the social and political realities of colonial Peru, engaging a broad academic readership with an interest in social and medical history.”
—Social History of Medicine

“Warren delves into a host of provocative topics . . . Perhaps the most intriguing of Warren’s findings is that the political reforms resulting in independence terminated or stunted the medical reforms encouraged by the colonial bureaucracy.”
—Choice

“A well-written and valuable study of public health and medical practice that will be read and discussed widely.”
—Journal of Latin American Studies

“Adam Warrenprovides a fresh look at the Bourbon period through the history of medicine, healing, and health policy in colonial Peru, and its goal of growing the colony during the eighteenth and first half of the nineteenth century. It is one of the few works that examines the colonial origins of modern medical systems in Latin America.”

“Adam Warren uses debates over vaccinations and disease in late colonial Peru to shed light not only on ideas about the body and death but also on classic topics such as the Bourbon Reforms and trans-Atlantic ideas in the age of the Enlightenment. Moving as it does from the microbe to the macro, Medicine and Politics in Colonial Peru clears new paths about medicine and colonialism and deserves a broad audience.”

Adam Warren is assistant professor of history at the University of Washington.