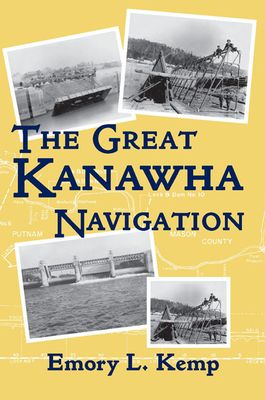 The vision of a central waterway connecting tidewater Virginia with the Ohio River to rival the Erie Canal persisted for decades during the 19th century. The idea was at first fostered by the commonwealth of Virginia and then reincarnated as the Central Water Line, which was endorsed by the federal government. It was a grand vision, and though never implemented, the Great Kanawha Navigation nevertheless became a highly successful regionally controlled waterway that developed the rich resources of the Kanawha Valley. Emory Kemp has compiled a comprehensive history of navigation on the Great Kanawha River, detailing the industrial archaeology of this waterway from the early 19th century, and offering a detailed case study of a major 19th- and early 20th-century civil engineering project that would significantly advance the nation's industrial development.

Using the early unsuccessful attempts to connect the James River and western waters as a background, The Great Kanawha Navigation emphasizes technological innovation and construction of navigational structures on the river. With the river men championing open navigation during favorable stages of the river, and at the same time clamoring for controls to ensure navigation during periods of low flow, the Corps of Engineers responded with the concept of the movable dam to provide a cost-effective means of moving bulk cargo, especially coal, salt, lumber, cement, and chemicals, along nearly 100 miles of the Great Kanawha River. The Great Kanawha Navigation employed a series of ten locks and dams and became a laboratory for the use of movable dams in the United States, using first the French Chanoine shutter wicket dam and then the German Roller Gate dam. The innovative technology of the ten dams, the volume of freight carried and the management of the system by the Corps of Engineers made this one of the most significant public works in the nation. Each of the two systems provided cost-effective and environmentally sound means to tap the rich mineral resources of the Kanawha Valley. By any measure, the Great Kanawha Navigation has been one of the more successful ventures of the Corps of Engineers; Kemp has provided extensive photographs, illustrations, diagrams, and maps to further emphasize the construction of the various hydraulic structures. The result is an interesting and significant blend of biographical, technical, political, geographical, and industrial history that will delight historians of technology and the region.


Praise For The Great Kanawha Navigation…

“An insightful case study of an extensive transport system, this work admirably details the innovative and moveable dam technology employed, and places these ambitious public works within the broader context of social and industrial history.”

“Kemp’s book is a welcome contribution to the history of American hydraulic engineering, for it is the first comprehensive account of the development of one of the country’s major inland navigation systems.”

“The best book to be written about the origins and operations of America’s modern inland navigation system.”

“This study is an important contribution to the history of river engineering in America.”

Dr. Emory Kemp is the founder and director of the Institute for the History of Technology and Industrial Archaeology at West Virginia University, where he was also chair and professor of civil engineering at the College of Engineering, and a professor of history in the Eberly College of Arts and Sciences. He has served as president of the Public Works Historical Society, is a codirector of the Smithsonian Institution/West Virginia University Joint Project for the History of Technology, and has presented numerous papers and published many articles on industrial archeology, engineering, the history of technology, structural mechanics, and public works in journals such as the Journal of the Society for Industrial Archaeology, Public Historian, Essays in Public Works History, Public Works Magazine, and Canal History and Technology Proceedings. He lives in Morgantown, WV.