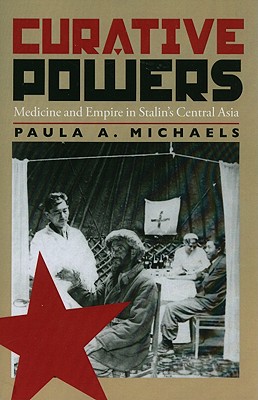 Rich in oil and strategically located between Russia and China, Kazakhstan is one of the most economically and geopolitically important of the so-called Newly Independent States that emerged after the USSR's collapse. Yet little is known in the West about the region's turbulent history under Soviet rule, particularly how the regime asserted colonial dominion over the Kazakhs and other ethnic minorities.

Grappling directly with the issue of Soviet colonialism, Curative Powers offers an in-depth exploration of this dramatic, bloody, and transformative era in Kazakhstan's history. Paula Michaels reconstructs the Soviet government's use of medical and public health policies to change the society, politics, and culture of its outlying regions. At first glance the Soviets' drive to modernize medicine in Kazakhstan seems an altruistic effort to improve quality of life. Yet, as Michaels reveals, beneath the surface lies a story of power, legitimacy, and control. The Communist regime used biomedicine to reshape the function, self-perception, and practices of both doctors and patients, just as it did through education, the arts, the military, the family, and other institutions.

Paying particular attention to the Kazakhs' ethnomedical customs, Soviet authorities designed public health initiatives to teach the local populace that their traditional medical practices were backward, even dangerous, and that they themselves were dirty and diseased. Through poster art, newsreels, public speeches, and other forms of propaganda, Communist authorities used the power of language to demonstrate Soviet might and undermine the power of local ethnomedical practitioners, while moving the region toward what the Soviet state defined as civilization and political enlightenment.

As Michaels demonstrates, Kazakhs responded in unexpected ways to the institutionalization of this new pan-Soviet culture. Ethnomedical customs surreptitiously lived on, despite direct, sometimes violent, attacks by state authorities. While Communist officials hoped to exterminate all remnants of traditional healing practices, Michaels points to evidence that suggests the Kazakhs continued to rely on ethnomedicine even as they were utilizing the services of biomedical doctors, nurses, and midwives. The picture that ultimately emerges is much different from what the Soviets must have imagined. The disparate medical systems were not in open conflict, but instead both indigenous and alien practices worked side by side, becoming integrated into daily life.

Combining colonial and postcolonial theory with intensive archival and ethnographic research, Curative Powers offers a detailed view of Soviet medical initiatives and their underlying political and social implications and impact on Kazakh society. Michaels also endeavors to link biomedical policies and practices to broader questions of pan-Soviet identity formation and colonial control in the non-Russian periphery.

“Takes an important step in examining the breadth of modern imperial ideology across the european continent and in the colonized world.”
—Journal of Colonialism and Colonial History

“Contributes to the history of a country that still remains enigmatic for the English-speaking audience.”
—Journal of the History of Medicine

“Far ahead of the rest of the field.”
--Canadian Journal of History

Paula A. Michaels, assistant professor of history at the University of Iowa, is a recipient of the Louis Dupree Prize for Central Asian Research.