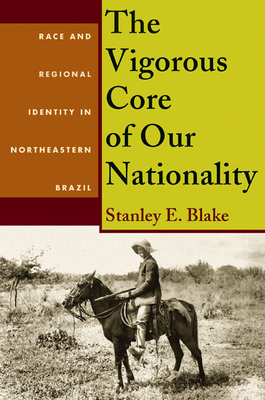 The Vigorous Core of Our Nationality

The Vigorous Core of Our Nationality explores conceptualizations of regional identity and a distinct population group known as nordestinos in northeastern Brazil during a crucial historical period. Beginning with the abolition of slavery and ending with the demise of the Estado Novo under Getúlio Vargas, Stanley E. Blake offers original perspectives on the paradoxical concept of the nordestino and the importance of these debates to the process of state and nation building.
Since colonial times, the Northeast has been an agricultural region based primarily on sugar production. The area’s population was composed of former slaves and free men of African descent, indigenous Indians, European whites, and mulattos. The image of the nordestino was, for many years, linked with the predominant ethnic group in the region, the Afro-Brazilian. For political reasons, however, the conception of the nordestino later changed to more closely resemble white Europeans.
Blake delves deeply into local archives and determines that politicians, intellectuals, and other urban professionals formulated identities based on theories of science, biomedicine, race, and social Darwinism. While these ideas served political, social, and economic agendas, they also inspired debates over social justice and led to reforms for both the region and the people. Additionally, Blake shows how debates over northeastern identity and the concept of the nordestino shaped similar arguments about Brazilian national identity and “true” Brazilian people.


Praise For The Vigorous Core of Our Nationality: Race and Regional Identity in Northeastern Brazil (Pitt Latin American Series)…

“Blake’s discussion of the construction of northeastern racial identity is a valuable addition to a field that tends to privilege the history of Brazil’s economically dominant center-south. . . . What is new is the historic specificity that Blake brings to this topic, demonstrating the variable impact of both rapidly evolving intellectual trends and the political and economic exigencies of the time. . . . Superb in the details.”

“A well-crafted and carefully executed study that brings a new approach to understanding the construction of an important Brazilian regional identity, using the lens of racial thought.”
—Quarterly Review of Inter-American Cultural History

“The Vigorous Core of Our Nationality changes the way we understand brasilidade, and thus Brazil.  Blake shows how the Northeast was a created ‘other,’ providing a foil for a national idea of ‘Brazilianness.’ Yet as Blake shows, creations often lead to realities.  Thus the invention of the nordestino gave urban professionals and government officials a justification for social reform programs aimed at improving what would become an essential aspect of Brazilian identity.”
—Jeffrey Lesser, Emory University

“Blake brings a different approach to the topic by emphasizing the role of politicians, civil servants, urban professionals, scientists, and physicians in ‘creating’ northeastern regional identity. His very approach moves him to bring new sources, theory, and insights to the subject of regional and national identity and enables him to present political, scientific, and social history in a refreshing and compelling manner.”
—James N. Green, Brown University

Stanley E. Blake is assistant professor of history at The Ohio State University at Lima.