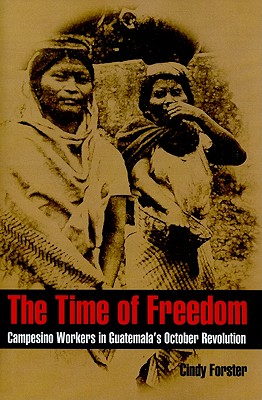 The Time of Freedom

"The time of freedom" was the name that plantation workers—campesinos—gave to  Guatemala’s national revolution of 1944–1954. Cindy Forster reveals the critical role played by the poor in organizing and sustaining this period of reform.

Through court records, labor and agrarian ministry archives, and oral histories, Forster demonstrates how labor conflict on the plantations prepared the ground for national reforms that are usually credited to urban politicians. She focuses on two plantation zones that generated exceptional momentum: the coffee belt in the highlands around San Marcos and the United Fruit Company’s banana groves near Tiquisate. Although these regions were unlike in size and complexity, language and race, popular culture and work patterns, both erupted with demands for workers’ rights and economic justice shortly after the fall of Castañeda in 1944.

A welcome balance to the standard "top-down" histories of the revolution, Forster’s sophisticated analysis demonstrates how campesinos changed the course of the urban revolution. By establishing the context of grassroots mobilization, she substantially alters the conventional view of the entire revolution, and particularly the reforms enacted under President Albenz.


Praise For The Time of Freedom: Campesino Workers in Guatemala’s October Revolution…

“A compelling and provocative contribution to the slowly expanding body of research on Guatemala’s 1944-54 revolution.”
—Hispanic American Historical Review

“Exceptional. . . . Rich in ethnographic detail and covers many aspects of change triggered by the agrarian revolution of 1944-1954.”
—American Historical Review

“In contrast to many accounts that emphasize the top-down, urban-initiated nature of reforms, Forster places rural workers in the center of the political drama and demonstrates that they often were ahead of the revolutionary state... her skill in securely locating local histories in national contexts enables her to emphasize the complexities of the process without losing clarity.”
—Choice

Cindy Forster has worked with immigrants rights networks in the San Francisco Bay area, with labor and human rights groups addressing problems in Central America, and as a union organizer with Justice for Janitors and the Silicon Valley Organizing Project. She is an assistant professor of history at Scripps College in Claremont, California.