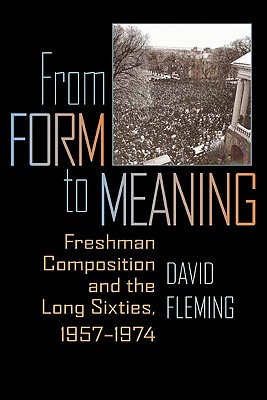 From Form to Meaning

In the spring of 1968, the English faculty at the University of Wisconsin-Madison (UW) voted to remedialize the first semester of its required freshman composition course, English 101. The following year, it eliminated outright the second semester course, English 102. For the next quarter-century, UW had no real campus-wide writing requirement, putting it out of step with its peer institutions and preventing it from fully joining the "composition revolution" of the 1970s. In From Form to Meaning, David Fleming chronicles these events, situating them against the backdrop of late 1960s student radicalism and within the wider changes taking place in U.S. higher education at the time.
Fleming begins with the founding of UW in 1848. He examines the rhetorical education provided in the university's first half-century, the birth of a required, two semester composition course in 1898, faculty experimentation with that course in the 1920s and 1930s, and the rise of a massive "current-traditional" writing program, staffed primarily by graduate teaching assistants (TAs), after World War II. He then reveals how, starting around 1965, tensions between faculty and TAs concerning English 101-102 began to mount. By 1969, as the TAs were trying to take over the committee that supervised the course, the English faculty simply abandoned its long-standing commitment to freshman writing.
In telling the story of composition's demise at UW, Fleming shows how contributing factors-the growing reliance on TAs; the questioning of traditional curricula by young instructors and their students; the disinterest of faculty in teaching and administering general education courses-were part of a larger shift affecting universities nationally. He also connects the events of this period to the long, embattled history of freshman composition in the United States. And he offers his own thoughts on the qualities of the course that have allowed it to survive and regenerate for over 125 years.


Praise For From Form to Meaning: Freshman Composition and the Long Sixties, 1957-1974 (Pitt Series in Composition)…

“Through a detailed history of the collapse of the University of Wisconsin-Madison Writing program in the late 1960s, Fleming provides a fascinating and vital portrait of a field on the cusp of legitimacy as well as an important reminder to all of us that history and careers are often made (and lost) in the departmental hallways that mark our everyday life.”
—Stephen Parks, Syracuse University

“Fleming presents a timely historical study of English departments’ inability to come to terms with their dependence on composition. This alienation from our basic work has led to the temping out of teaching and the collapse of tenure-track jobs. Fleming makes a compelling case for the need to reevaluate the critical potentials of general education as a liminal space that is fundamental to the work of the academy and vital to the future of the discipline.”
—Thomas P. Miller, University of Arizona

“Offers a rich, detailed historical study, a compelling narrative that will fascinate anyone—students and teachers alike—connected to or interested in the teaching of writing and rhetoric in higher education. Highly recommended.”
—Choice

David Fleming is associate professor of English and director of the Writing Program at the University of Massachusetts Amherst. He is the author of City of Rhetoric: Revitalizing the Public Sphere in Metropolitan America.
Loading...
or support indie stores by buying on