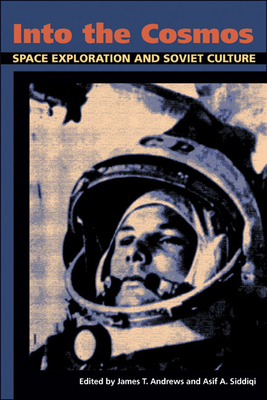 The launch of the Sputnik satellite in October 1957 changed the course of human history. In the span of a few years, Soviets sent the first animal into space, the first man, and the first woman. These events were a direct challenge to the United States and the capitalist model that claimed ownership of scientific aspiration and achievement.
The success of the space program captured the hopes and dreams of nearly every Soviet citizen and became a critical cultural vehicle in the country’s emergence from Stalinism and the devastation of World War II. It also proved to be an invaluable tool in a worldwide propaganda campaign for socialism, a political system that could now seemingly accomplish anything it set its mind to.
Into the Cosmos shows us the fascinating interplay of Soviet politics, science, and culture during the Khrushchev era, and how the space program became a binding force between these elements. The chapters examine the ill-fitted use of cosmonauts as propaganda props, the manipulation of gender politics after Valentina Tereshkova’s flight, and the use of public interest in cosmology as a tool for promoting atheism. Other chapters explore the dichotomy of promoting the space program while maintaining extreme secrecy over its operations, space animals as media darlings, the history of Russian space culture, and the popularity of space-themed memorabilia that celebrated Soviet achievement and planted the seeds of consumerism.


Praise For Into the Cosmos: Space Exploration and Soviet Culture (Russian and East European Studies)…

“USSR spaceflight triumphs between 1957 and 1965 marked the apogee of Soviet civilization. Into the Cosmos provides important new insights into the culture, society, and politics of the Khrushchev era through the lens of the cosmonauts and their record-setting journeys. Chapters in this collection cover topics ranging from secrecy and celebrity to gender and consumerism, illuminating a relatively neglected period in Soviet history. This book should prove equally valuable to scholars of Eastern Europe and to historians of science, technology, and space exploration.”
—Michael Neufeld, Smithsonian Institution

“I am very enthusiastic about Into the Cosmos. It builds upon previous scholarship but brims over with new and challenging ideas about the intentions of political authorities, their complex relations with the scientific-technical community, and the larger meanings of space endeavors and accomplishments for the broader Soviet—and beyond it, the global—community.”
—Lewis Siegelbaum, Michigan State University

“This insightful examination of Soviet culture does not whitewash it, but shows instead a society seeking to recover from the Stalinist era by expressing genuine pride in a new achievement, all the while exhibiting early cynicism about some of Soviet Communism’s promises.”
—Choice

“An important work in that it explores the public perceptions [of] an event that has never before happened in the history of mankind . . . informative and engaging.”

"This engaging and informative collection of essays not only makes an important contribution to historical writing on the Khrushchev and early Brezhnev eras but also serves as an essential starting point for all new work on the many facets of Soviet space exploration and its impact both home and abroad."
—Russian Review

“Full of minute but fascinating detail . . . surprisingly easy to read.”

James T. Andrews is professor of modern Russian history at Iowa State University, and director of the Humanities Center. He is the author or editor of four books, including Red Cosmos: K. E. Tsiolkovskii, Grandfather of Soviet Rocketry; Science for the Masses: The Bolshevik State, Public Science, and the Popular Imagination in Soviet Russia, 1917-1934; and Maksim Gor’kii, Science, and Revolution.

Asif A. Siddiqi is associate professor of history of technology and Russian history at Fordham University. He is the author or editor of three books, including The Red Rockets’ Glare: Spaceflight and the Soviet Imagination, 1857-1957 and Challenge to Apollo: The Soviet Union and the Space Race, 1945-1974.