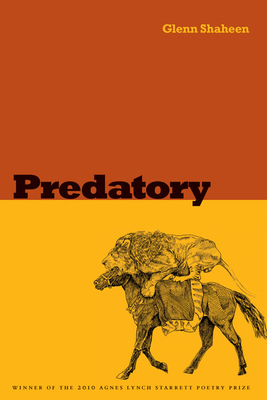 “Glenn Shaheen is claiming new ground for American poetry. His poems are about the nightmares of information overload, collapsing infrastructure, ubiquitous violence, and other ills of late empire. The subjects are not happy, but Shaheen's clear vision and crisp—often witty—language offer the pleasures of surprise, discovery, and recognition.”
—Ed Ochester

“Glenn Shaheen is claiming new ground for American poetry. His poems are about the nightmares of information overload, collapsing infrastructure, ubiquitous violence, and other ills of late empire. The subjects are not happy, but Shaheen's clear vision and crisp—often witty—language offer the pleasures of surprise, discovery, and recognition.”
—Ed Ochester

“Glenn Shaheen is sort of a genius at jimmying his spatula into the cracks of contemporary America—the places where the edges don’t quite fit together, where the not-so-funny throbs and baffles, a place where ‘the city grass is killed / by the same chemical in the water designed to keep / our teeth strong.’ And where a surgeon opens a patient’s heart and says ‘there's a place a lot of love could exist.’ Shaheen’s comedy often goes beyond slapstick and the personal, into a realm of ominous narrative ambiguity that catches, in fact, the tragic nature of our time. Predatory makes a surprising and substantial addition to our literary tradition of the reckless, dead-serious-funny.”
—Tony Hoagland

“The narrator of these poems is subversive, vulnerable, maybe brilliant, seemingly offhand—he’s your best friend, he is what you fear. Each poem is thrillingly restless, yet the world revealed all seems so apocalyptically familiar, if you have been paying attention, if you have been even half awake. Predatory is a phenomenal first book—who knew a complete guide to catastrophe and mayhem could be so engaging?”
—Nick Flynn

“Thankfully, in Predatory, Glenn Shaheen’s souped-up debut, ‘There’s a tiger behind every door.’ All the great American myths are present. Star Trek. Saran Wrap. The Rothko Chapel. ‘A Pfizer truck T-boning a gasoline truck / in rush hour traffic.’ This is a disparate poetry of local access, end of days, old junk, all the evil in the animal kingdom. And that’s just the start. Shaheen chronicles exactly how it’s come to this: our twenty-first-century global chasm. These are poems for those of us among the unelected. In these pre-Rapturous days, Predatory is visionary.”
—Quan Barry

“Each poem is unique and heartwrenching, meant for the restless soul. It’s like he is applying today’s headlines to our personal lives.”
—Book Bargains and Reviews

“One of the most striking features of this book is its accessibility . . . It is a testament to how skillfully Shaheen puts his images together within the poem and reveals something about our lives. . . . This book is what it is like to live today: an accomplishment and a sign of great things to come.”

Glenn Shaheen was born in Halifax, Nova Scotia. He is a former nonfiction editor for Gulf Coast, and presently edits the journal NANO Fiction. His work has appeared in Subtropics, /nor, Barrelhouse, and Washington Square, among other publications. He currently serves on the board of directors for the Radius of Arab-American Writers, Inc.