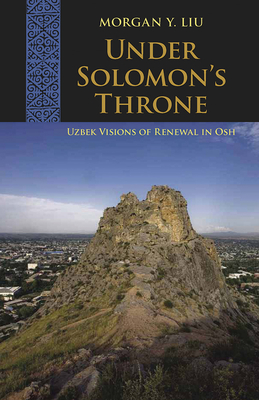 Uzbek Visions of Renewal in Osh (Central Eurasia in Context)

Winner of the 2014 Central Eurasian Studies Society Book Award in the Social Sciences.

Under Solomon’s Throne provides a rare ground-level analysis of post-Soviet Central Asia’s social and political paradoxes by focusing on an urban ethnic community: the Uzbeks in Osh, Kyrgyzstan, who have maintained visions of societal renewal throughout economic upheaval, political discrimination, and massive violence.

Morgan Liu illuminates many of the challenges facing Central Asia today by unpacking the predicament of Osh, a city whose experience captures key political and cultural issues of the region as a whole. Situated on the border of Uzbekistan and Kyrgyzstan—newly independent republics that have followed increasingly divergent paths to reform their states and economies—the city is subject to a Kyrgyz government, but the majority of its population are ethnic Uzbeks. Conflict between the two groups led to riots in 1990, and again in 2010, when thousands, mostly ethnic Uzbeks, were killed and nearly half a million more fled across the border into Uzbekistan. While these tragic outbreaks of violence highlight communal tensions amid long-term uncertainty, a close examination of community life in the two decades between reveals the way Osh Uzbeks have created a sense of stability and belonging for themselves while occupying a postcolonial no-man’s-land, tied to two nation-states but not fully accepted by either one.

The first ethnographic monograph based on extensive local-language fieldwork in a Central Asian city, this study examines the culturally specific ways that Osh Uzbeks are making sense of their post-Soviet dilemmas. These practices reveal deep connections with Soviet and Islamic sensibilities and with everyday acts of dwelling in urban neighborhoods. Osh Uzbeks engage the spaces of their city to shape their orientations relative to the wider world, postsocialist transformations, Islamic piety, moral personhood, and effective leadership. Living in the shadow of Solomon’s Throne, the city’s central mountain, they envision and attempt to build a just social order.

Morgan Y. Liu is assistant professor of anthropology in the Department of Near Eastern Languages and Cultures at The Ohio State University.


Praise For Under Solomon's Throne: Uzbek Visions of Renewal in Osh (Central Eurasia in Context)…

“A groundbreaking firsthand anthropological and sociological examination of the lives of Osh Uzbeks in political, economic, societal, and religious contexts, bracketed by two traumatic episodes of Kyrgyz-Uzbek conflict in 1990 and 2010.”

“An urban portrait in miniature. It is at once a brilliant example of the capacity for immersive, long-term fieldwork to bring new light to enduring questions of urban conviviality, and a demonstration that subtle, multi-layered analysis can be rendered in clear and accessible prose. . . . An important and provocative book. It deserves to be widely read by scholars of the region, by students of contemporary urban politics, and by anthropologists exploring the intersections between space, embodiment and social imaginaries. Among its many virtues is its subtle and nuanced attention to language, getsure and tone. It is a beautifully crafted text and deserves to find a ready place in undergraduate and graduate courses on Central Asia.”
—Contemporary Islam

”Well grounded ethnographic data come together in a convincing way with historical data. . . . The book is not only accessible to a broad student audience interested in Central Asia, but also to those Westerners who have little knowledge of Central Asia.”
--Europe-Asia Studies

“Important for its perceptive interpretations and skillful experimentation with standard ethnographic tropes, and it confirms the unique contribution anthropology can make to the study of the former Soviet Union.”

“Under Solomon’s Throne is a real field-changer. Liu’s book stands to do the most in terms of advancing scholarship on the region as well as a general understanding of the lived experiences of Central Asians.  It does a magnificent job at portraying Central Asian Muslims in realistic and three-dimensional terms.  It is finding an enthusiastic audience among scholars of multiple disciplines, including of course Anthropology and Sociology, as well as IR/Political Science, and has already made its way into the classroom.  . . . This ethnographic study gets to the heart of the paradoxical social dynamics that have twice in twenty years propelled the city of Osh into ethnicity-based riots and potential war, sending as many as half a million people fleeing as refugees.  The study is wonderfully researched and brilliantly illustrates the ways in which Osh is reflective of the region as a whole. The scholarship is exceptional.”—Judging Panel, 2014 Central Eurasian Studies Society annual book award

“This is one of the best books yet published on any post-Soviet country in Central Asia. The overview of Kyrgyzstan’s post-Soviet history is comprehensive, and the insightful social analysis helps the reader understand the entire region much better. The book’s rich and vividly presented ethnographic evidence teaches us a lot about the texture of everyday life in Osh.”
—Laura Adams, Harvard University

“An ethnographic gem, resulting from impassioned and intellectually engaged scholarship. Liu took his time processing the fieldwork, and the insightful writing illuminates creatively framed ways of getting readers to think about how Central Asians understand their communities and places in the world. This book is must reading for anyone wanting a serious understanding of the Fergana Valley, given the ugly aftermath of the Soviet experience.”
—Russell Zanca, Northeastern Illinois University
or
Not Currently Available for Direct Purchase
Copyright © 2020 American Booksellers Association