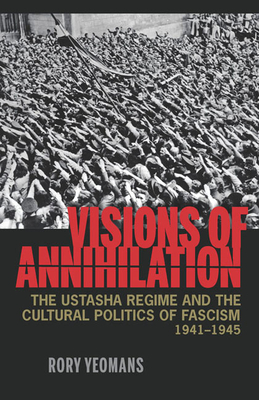 The Ustasha Regime and the Cultural Politics of Fascism, 1941–1945 (Russian and East European Studies)

The fascist Ustasha regime and its militias carried out a ruthless campaign of ethnic cleansing that killed an estimated half million Serbs, Jews, and Gypsies, and ended only with the defeat of the Axis powers in World War II.

In Visions of Annihilation, Rory Yeomans analyzes the Ustasha movement’s use of culture to appeal to radical nationalist sentiments and legitimize its genocidal policies. He shows how the movement attempted to mobilize poets, novelists, filmmakers, visual artists, and intellectuals as purveyors of propaganda and visionaries of a utopian society. Meanwhile, newspapers, radio, and speeches called for the expulsion, persecution, or elimination of “alien” and “enemy” populations to purify the nation. He describes how the dual concepts of annihilation and national regeneration were disseminated to the wider population and how they were interpreted at the grassroots level.

Yeomans examines the Ustasha movement in the context of other fascist movements in Europe. He cites their similar appeals to idealistic youth, the economically disenfranchised, racial purists, social radicals, and Catholic clericalists. Yeomans further demonstrates how fascism created rituals and practices that mimicked traditional religious faiths and celebrated martyrdom.

Visions of Annihilation chronicles the foundations of the Ustasha movement, its key actors and ideologies, and reveals the unique cultural, historical, and political conditions present in interwar Croatia that led to the rise of fascism and contributed to the cataclysmic events that tore across the continent.


Praise For Visions of Annihilation: The Ustasha Regime and the Cultural Politics of Fascism, 1941–1945 (Russian and East European Studies)…

"Shows the relationship between the revolution of blood and the revolution of soul and how this relationship was constantly present in every cultural form. In doing so the author depicts both the Ustasha ideology and attempt to make it into the ideology of the nation. The author successfully links the cultural politics and the persecution of so-called 'foreigners and racial aliens' and shows how cultural politics was always at the service of the genocidal policy adopted by the regime. At the same time, throughout his book, Yeomans continuously highlights the contradictions between the messages sent by Ustasha cultural politics, showing the tension between the struggle for modernization and the exaltation of peasant village life."
—History

"This work makes an important contribution to the cultural history of Croatian fascism during WWII. Yeomans provides a highly detailed analysis of the Ustasha movement's efforts to create a new facist culture within the newly constituted Ustasha state. . . . He illustrates well the tensions that arose from this radical project of annihilation and national regeneration, and locates it within the wider parameters of European fascism."
—Choice

"The internal dynamics of wartime Croatia have long been neglected in favor of its relations with the Axis powers. . . . This approach paints a passive picture of the Ustasha's own program to subordinate both Croatia and Bosnia-Herzegovina to its vision of an integrally Croatian nation-sate. Rory Yeomans fills in the picture with evidence of a more independently active, ambitiously fascist, but sometimes divided regime."
—Slavic Review

“Using innovative approaches, Yeomans' impressive work deals with the Ustasha regime, the Independent State of Croatia (1941-1945). Through examination of cultural ideas and their application during the so-called 'revolution of the soul', Yeomans deals with questions which have been almost completely neglected among scholars dealing with this topic. . . . Presents the reader with a fresh view on how the Ustasha envisioned and imagined the Croatian nation, its culture, its future, and society in general. Yeomans' book moves further from traditional explanations of the Ustasha movement and their regime, and examines them from a methodologically innovative perspective. In his work Yeomans applies culturalist approaches, at the same time situating his research in a broader, comparative perspective of fascism. In the end, it shows that when considered, examined, and contextualized within the broader perspective of European facism it becomes clear that Ustasha movement and their regime were not just a disorganized rabble of political gangsters."
—Facism

"Visions of Annihilation  arguably . . . should be mandatory reading for those in contemporary Croatia who engage in dangerous populist attempts to rehabilitate elements of Ustasha ideology."
—Holocaust and Genocide Studies

“Impressive and innovative . . . an important and challenging addition both to the literature of the civil war in Yugoslavia and to that of eastern European fascism.”
—H-Soz-u-Kult

“An important addition to the growing literature on the Second World War in the former Yugoslavia . . .Yeomans is most effective at chronicling Ustasha cultural pretentions.”
—Slavonic and East European Review

Rory Yeomans is a fellow in history at the Wiener Wiesenthal Institute for Holocaust Studies, Vienna.