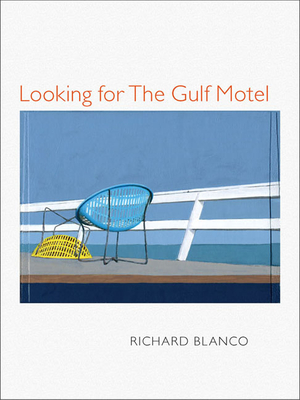 Family continues to be a wellspring of inspiration and learning for Blanco. His third book of poetry, Looking for The Gulf Motel, is a genealogy of the heart, exploring how his family’s emotion legacy has shaped—and continues shaping—his perspectives. The collection is presented in three movements, each one chronicling his understanding of a particular facet of life from childhood into adulthood. As a child born into the milieu of his Cuban exiled familia, the first movement delves into early questions of cultural identity and their evolution into his unrelenting sense of displacement and quest for the elusive meaning of home. The second, begins with poems peering back into family again, examining the blurred lines of gender, the frailty of his father-son relationship, and the intersection of his cultural and sexual identities as a Cuban-American gay man living in rural Maine. In the last movement, poems focused on his mother’s life shaped by exile, his father’s death, and the passing of a generation of relatives, all provide lessons about his own impermanence in the world and the permanence of loss. Looking for the Gulf Motel is looking for the beauty of that which we cannot hold onto, be it country, family, or love.


Praise For Looking for The Gulf Motel (Pitt Poetry Series)…

“W. H. Auden, asked to define poetry from the other written arts, wrote that poetry was ‘memorable speech.’ Richard Blanco’s speech invites the reader in with its search for home. His lyrics open doors onto his Cuban immigrant family, his father’s early death, and his own migration from a life in Florida to a life in Maine. His speech houses a generous love of others and a persistent reach for what is absent. There is nothing here you will not remember.”
—Spencer Reece

“Every poem in Looking for The Gulf Motel packs an emotional wallop and an intellectual caress. A virtuoso of art and craft who juggles the subjective and the objective beautifully, Blanco is at the height of his creative prowess and one of the best of the best poets writing today.”
—Jim Elledge

“The poems in Looking for The Gulf Motel are bittersweet songs that ache with the ‘sweet and slow honey of a bolero.’ They croon about journeys from Cuba and Spain to Florida and Maine; mourn languages, lovers, and names that were or could have been; and praise the forgotten pop culture icons that expanded one young person’s view of his nationality and manhood. If all loss is like exile, Blanco tells us, then searching for love (in the self, in others) is healing, is finding home, because ‘love is thicker than any country.’”
—Rigoberto González

“The main thing about Blanco’s poems is how lyrical his voice is and how universal his themes, how easily we can relate to his concerns.”

"These are poems of poetic beauty and heart, confession and acceptance, courage and love. Wonderful."

Richard Blanco was selected as the 2013 inaugural poet for President Barack Obama. He is the author of two other poetry collections: Directions to The Beach of the Dead, winner of the PEN/Beyond Margins Award; and City of a Hundred Fires, winner of the Agnes Lynch Starrett Poetry Prize. Exploring themes of Latino identity and place, Blanco's poems have appeared in Best American Poetry 2000 and Best American Prose Poems and have been featured on NPR. He is a fellow of the Bread Loaf Writers Conference, recipient of two Florida Artist Fellowships, and has taught at Georgetown and American universities. A builder of cities and poems, Blanco is also a professional civil engineer.