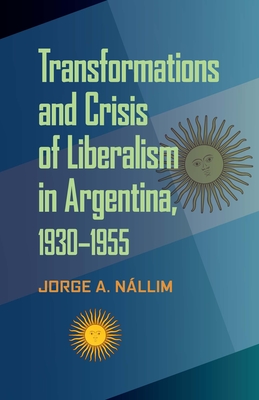 In this original study, Jorge A. Nállim chronicles the decline of liberalism in Argentina during the volatile period between two military coups—the 1930 overthrow of
Hipólito Yrigoyen and the deposing of Juan Perón in 1955. While historians have primarily focused on liberalism in economic or political contexts, Nállim instead documents a wide range of locations where liberalism was claimed and ultimately marginalized in the pursuit of individual agendas.

Nállim shows how concepts of liberalism were espoused by various groups who “invented traditions” to legitimatize their methods of political, religious, class, intellectual, or cultural hegemony. In these deeply fractured and corrupt processes, liberalism lost political favor and alienated the public. These events also set the table for Peronism and stifled the future of progressive liberalism in Argentina.

Nállim describes the main political parties of the period and deconstructs their liberal discourses. He also examines major cultural institutions and shows how each attached liberalism to their cause.

Nállim compares and contrasts the events in Argentina to those in other Latin American nations and reveals their links to international developments. While critics have positioned the rhetoric of liberalism during this period as one of decadence or irrelevance, Nállim instead shows it to be a vital and complex factor in the metamorphosis of modern history in Argentina and Latin America as well.


Praise For Transformations and Crisis of Liberalism in Argentina, 1930–1955 (Pitt Latin American Series)…

“This excellent book advances our understandings of Argentine economic and political liberalism during the turbulent years from 1930 to 1950. . . . Nallim shines in his discussion of the flow of ideas through literary currents that transmitted liberal thought, and of how economic liberalism led to the Concordancia’s plans for economic reforms in the 1940s.”
--Latin American Studies

“Nallim has expertly written a much-needed book. The scholarship on liberalism has mostly centered either on its development and impact in the nineteenth century, particularly during its heyday between the 1880s and 1910s, or on its comeback during the neoliberal reforms of the 2990s. Instead, Nallim focuses on the voices of liberalism between 1930 and 1943; the Peronist years, as he acknowledges, are mostly a bookend for the main thrust of his analysis.”
--Hispanic American Historical Review

"By focusing on both political parties and intellectuals, the author shows the widespread importance of the liberal tradition in debates about the shifting nature of national politics. . . . This book will appeal to anybody interested in Argentine history or Latin American political history as well as those who want to learn more about the evolution of liberalism in the Americas."
--Canadian Journal of Latin American and Caribbean Studies


"Jorge Nállim provides us with a close reading of liberalism between 1930 and 1955 which provides rich material for a re-interpretation of liberalism in economic and political, but also cultural, terms."
—Bulletin of Latin American Research


“This book is an outstanding contribution to our understanding of Argentine history. Drawing on a wide range of primary and secondary sources, and filling a notable gap in the scholarly literature, Nállim provides a nuanced and sophisticated description and analysis of Argentine liberalism over a crucial quarter century. He also raises provocative questions about the connection between traditional liberalism and the rise of  ‘neoliberalism’ that will be of interest to a wide audience.”
—Richard J. Walter, emeritus, Washington University in St. Louis

“Often dismissed as narrowly elitist, liberalism was claimed and reformulated by Argentine progressives and conservatives alike, as Jorge Nállim shows. Even as it lost its hegemony, liberalism remained a critical reference point for intellectuals and politicians. This nuanced and cogent book demonstrates the centrality of liberalism in twentieth-century Argentina. It is vital reading for those interested in the study of Argentina, Latin America, and ideology.”
—Sandra McGee Deutsch, University of Texas at El Paso


“This book is an important reenvisioning of Argentine intellectual history. Jorge Nállim demonstrates that Argentine liberal thought between the Great Depression and the fall of Juan Perón did not belong only to conservatives. Rather many intellectual movements on the Left still looked to their liberal roots.”
—Joel Horowitz, St. Bonaventure University

Jorge A. Nállim is associate professor of history at the University of Manitoba.
Loading...
or
Not Currently Available for Direct Purchase