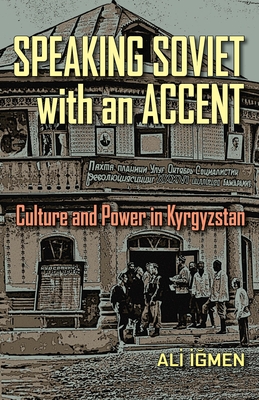 Speaking Soviet with an Accent (Paperback)

Culture and Power in Kyrgyzstan (Central Eurasia in Context)

Speaking Soviet with an Accent presents the first English-language study of Soviet culture clubs in Kyrgyzstan. These clubs profoundly influenced the future of Kyrgyz cultural identity and fostered the work of many artists, such as famed novelist Chingiz Aitmatov.

Based on extensive oral history and archival research, Ali Igmen follows the rise of culture clubs beginning in the 1920s, when they were established to inculcate Soviet ideology and create a sedentary lifestyle among the historically nomadic Kyrgyz people. These “Red clubs” are fondly remembered by locals as one of the few places where lively activities and socialization with other members of their ail (village or tribal unit) could be found.

Through lectures, readings, books, plays, concerts, operas, visual arts, and cultural Olympiads, locals were exposed to Soviet notions of modernization. But these programs also encouraged the creation of a newfound “Kyrgyzness” that preserved aspects of local traditions and celebrated the achievements of Kyrgyz citizens in the building of a new state. These ideals proved appealing to many Kyrgyz, who, for centuries, had seen riches and power in the hands of a few tribal chieftains and Russian imperialists.

This book offers new insights into the formation of modern cultural identity in Central Asia. Here, like their imperial predecessors, the Soviets sought to extend their physical borders and political influence. But Igmen also reveals the remarkable agency of the Kyrgyz people, who employed available resources to meld their own heritage with Soviet and Russian ideologies and form artistic expressions that continue to influence Kyrgyzstan today.

Praise For Speaking Soviet with an Accent: Culture and Power in Kyrgyzstan (Central Eurasia in Context)…

”While Central Eurasia has too often been neglected in modern scholarship, Kyrgyzstan has proved especially under-explored. Igmen has aided the field by delving into Central Asian archives and conducting invaluable oral history interviews. His book expands our understanding of  Kyrgyz experiences of Soviet culture and power. It invites not only new lines of historical inquiry into the Kyrgyz past, but also helps to contextualize and better appreciate the Kyrgyz present.”
--Europe-Asia Studies

”The book’s special contribution lies in examining the people in charge of implementing what we would now call the ‘soft power’ policies of the Soviet revolution in Central Asia, the Kyrgyz artistic intelligentsia whose subjectivity was formed in the employ of the first Soviet clubs, theaters, and houses of culture.”

"Undoubtedly a great contribution to the growing literature on the Central Asian region. In an elaborate analysis of cultural and educational clubs in Kyrgyzstan beginning in the 1920s, historian Ali ??men argues that Kyrgyz tradition meshed with Soviet art in the clubs to create representations of 'Kyrgyzness.' The book sheds light on the ways in which Kyrgyz selectively maintained certain pre-Soviet traditions while casting off others and adopting a new culture that resulted in an entirely new society. . . . Easy to understand and easy to read."
—International Social Science Review

“Igmen contributes an exemplary addition to the fields of oral history, cultural studies, and national identity.”

“Igmen’s research in Kyrgyzstan links rural to urban and local to national in an exploration of the cultural construction of ‘Kyrgyzness.’ In this admirable example of cultural history, the Soviet state shaped the structures through which Kyrgyz were to become modern, but Igmen elucidates the content of culture, drawing on many voices of Kyrgyz who articulate the ways that their own concepts of Kyrgyzness infused new cultural forms, rendering them meaningful.”
—Marianne Kamp, University of Wyoming

“Drawing on the rich history of comparative colonialism, Dr. Igmen’s fascinating account of the Cultural Revolution in Kyrgyzstan analyzes the many ways in which the Kyrgyz intelligentsia appropriated and refashioned the Soviet project in Central Asia.”
—Choi Chatterjee, California State University, Los Angeles
or
Not Currently Available for Direct Purchase
Copyright © 2020 American Booksellers Association