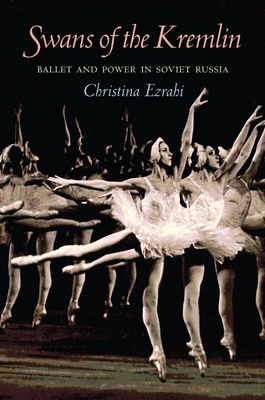 Swans of the Kremlin

Classical ballet was perhaps the most visible symbol of aristocratic culture and its isolation from the rest of Russian society under the tsars. In the wake of the October Revolution, ballet, like all of the arts, fell under the auspices of the Soviet authorities. In light of these events, many feared that the imperial ballet troupes would be disbanded. Instead, the Soviets attempted to mold the former imperial ballet to suit their revolutionary cultural agenda and employ it to reeducate the masses. As Christina Ezrahi’s groundbreaking study reveals, they were far from successful in this ambitious effort to gain complete control over art.

Swans of the Kremlin offers a fascinating glimpse at the collision of art and politics during the volatile first fifty years of the Soviet period. Ezrahi shows how the producers and performers of Russia’s two major troupes, the Mariinsky (later Kirov) and the Bolshoi, quietly but effectively resisted Soviet cultural hegemony during this period. Despite all controls put on them, they managed to maintain the classical forms and traditions of their rich artistic past and to further develop their art form. These aesthetic and professional standards proved to be the power behind the ballet’s worldwide appeal. The troupes soon became the showpiece of Soviet cultural achievement, as they captivated Western audiences during the Cold War period.

Based on her extensive research into official archives, and personal interviews with many of the artists and staff, Ezrahi presents the first-ever account of the inner workings of these famed ballet troupes during the Soviet era. She follows their struggles in the postrevolutionary period, their peak during the golden age of the 1950s and 1960s, and concludes with their monumental productions staged to celebrate the fiftieth anniversary of the revolution in 1968.


Praise For Swans of the Kremlin: Ballet and Power in Soviet Russia (Russian and East European Studies)…

”[Enriches] the developing sense of how Soviet artists worked with and against the official dictates of their time, and how they responded to the incidental squabbles and long-term preoccupations with which they had to contend. . . . Some vastly entertaining examples of the kind of bone-headed rhetoric still directed at adventurous work in the arts today (and not just in Russia) is what one might term an expected, but still welcome, bonus.”
—Times Literary Supplement

"Engaging, illuminating, and often provocative . . . A truly welcome addition to the field and recommended to scholars both of Soviet history and of the history of the performing arts more generally."
—American Historical Review

"This well-documented and thorough account of the artistic and political maneuvering that took place in Soviet ballet covers the first five decades of Soviet power, but its main focus is the complex ideology of the Khrushchev era and its various pressures on ballet. Christina Ezrahi shows that this pressure was a two-way process that involved what she has termed artistic repossession: artists' ability to maintain a semblance of artistic autonomy in the teeth of the 'Soviet cultural project'".
—Slavic Review

"An important achievement, which begins by confronting the primal question at the root of Soviet ballet: how this imperial-flavored art managed to survive the revolution."
--Kritika

“As dramatic as any of the grand ballets, Ezrahi’s investigation delves into the storied past of Russian ballet as the paragon of choreographic and balletic superiority and as a symbol of cultural supremacy under the Soviet regime. . . . Not only for ballet aficionados and history buffs, the author’s effort is a distinguished and intricate view of the intersection of art and politics. In the end, Ezrahi proves that even though art may be political, great art is not only deceitful and complex, but can rise above any ideology.”
—ForeWord Reviews

“That dancing—ballet—has ever touched something vital in the Russian spirit we accept. That Russian ballet survived the extremes of Bolshevik revolution, adapted and yet remained true to itself, we know, and we rejoice to know. Ezrahi helps us to understand how and why.”
—The Financial Times

“In Swans of the Kremlin Christina Ezrahi reconstructs long-ago debates and makes us hear—as though we were flies on the wall—voices arguing about what is or isn’t Soviet and even the quality of Russian versus Czech tights. She views Soviet ballet as a dynamic enterprise  negotiating the daily demands of a state cultural project and professional issues that often became an expression of political resistance.”
—Lynn Garafola, Columbia University

Christina Ezrahi is an independent scholar and historian of Russian culture.
Loading...
or
Not Currently Available for Direct Purchase