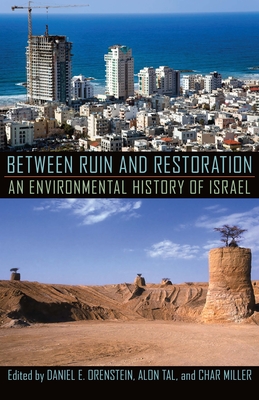 Between Ruin and Restoration (Paperback)

The environmental history of Israel is as intriguing and complex as the nation itself. Situated on a mere 8,630 square miles, bordered by the Mediterranean Sea and Persian Gulf, varying from desert to forest, Israel’s natural environment presents innumerable challenges to its growing population. The country’s conflicted past and present, diverse religions, and multitude of cultural influences powerfully affect the way Israelis imagine, question, and shape their environment. Zionism, from the late nineteenth onward, has tempered nearly every aspect of human existence. Scarcities of usable land and water coupled with border conflicts and regional hostilities have steeled Israeli’s survival instincts. As this volume demonstrates, these powerful dialectics continue to undergird environmental policy and practice in Israel today.

Between Ruin and Restoration assembles leading experts in policy, history, and activism to address Israel’s continuing environmental transformation from the biblical era to the present and beyond, with a particular focus on the past one hundred and fifty years. The chapters also reflect passionate public debates over meeting the needs of Israel’s population and preserving its natural resources.

The chapters detail the occupations of the Ottoman Empire and British colonialists in eighteenth and nineteenth century Palestine, as well as Fellaheen and pastoralist Bedouin tribes, and how they shaped much of the terrain that greeted early Zionist settlers. Following the rise of the Zionist movement, the rapid influx of immigrants and ensuing population growth put new demands on water supplies, pollution controls, sanitation, animal populations, rangelands and biodiversity, forestry, marine policy, and desertification. Additional chapters view environmental politics nationally and internationally, the environmental impact of Israel’s military, and considerations for present and future sustainability.

Daniel E. Orenstein is senior lecturer in the faculty of architecture and town planning at the Technion-Israel Institute of Technology.
Alon Tal is associate professor in the Institute for Dryland Environmental Research at Ben-Gurion University of the Negev in
Beer-Sheva, Israel. He is the author or editor of several books, including Water Wisdom: Preparing the Groundwork for Cooperative and Sustainable Water Management in the Middle East and Speaking of Earth: Environmental Visions and Speeches.
Char Miller is director of the Environmental Analysis Program and the W. M. Keck Professor of Environmental Analysis at Pomona College in California. He is the author or editor of numerous books, including Public Lands/Public Debates: A Century of Controversy and Out of the Woods: Essays in Environmental History.

Praise For Between Ruin and Restoration: An Environmental History of Israel (Pittsburgh Hist Urban Environ)…

“A truly exceptional group of people—academics, policy people, and activists—gathered together to produce this remarkable book, offering, for the first time, various perspectives on Israel’s environmental history. This book is a must read for anybody interested in this field.”
—Avner de Shalit, The Hebrew University of Jerusalem

“This is a state-of-the-art survey of environmental history in Israel, showing how politics, law, and international relations are related to nature in the land of Israel. The authors are uniquely qualified and bring new, up-to-date information from excellent sources. They have contrasting views, but all are thought provoking. There is no other collection on this subject that is so inclusive and of such quality. It will be a classic.”
—J. Donald Hughes, University of Denver

“A superb collection of studies on virtually every aspect of Israeli environmental history, ranging from the ecological impact of Bedouin herders in Turkish-ruled Palestine of the nineteenth century to contemporary controversies over population growth, water policy, urban land use, and others. Written from a diverse array of disciplinary and political perspectives by a group of
leading environmental scholars and activists, this book is an essential read for anyone with an interest in the environmental challenges and history of Israel and the Middle East more generally.”
—Noga Morag-Levine, Michigan State University College of Law

“Highly recommended. . . with penetrating analyses of topics such as wildlife, desertification, the water crisis, urban open space, environmentalism and politics, population growth, sustainable development, and militarism and the environment. . . . This is not a large book, but it seems encyclopedic in its coverage, and it could become an important policy guide for Israel’s democracy. It can also provide ideas for other democracies, especially in arid countries. Israel’s environmental experts are happy to provide advice to other governments, because environmental diplomacy can build alliances and improve the world for everyone. Environmentalists anywhere can learn much from these accounts.”

“This volume [will] be of considerable interest to all readers who would like to deepen and broaden their knowledge of [Israel’s] environment. . . . Of great value for teachers of academic courses about the history of the country, the Israeli state, the Israeli people and society, and, in some cases, the entire region during the past two centuries. . . . Provides a seminal contribution to the study of environmental history in the western part of Asia.”
—Evironmental History
or
Not Currently Available for Direct Purchase
Copyright © 2020 American Booksellers Association