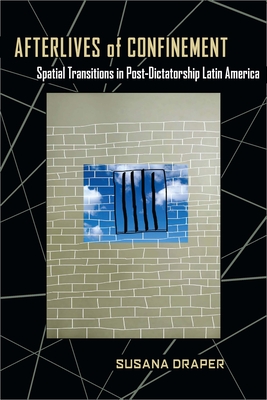 During the age of dictatorships, Latin American prisons became a symbol for the vanquishing of political opponents, many of whom were never seen again. In the postdictatorship era of the 1990s, a number of these prisons were repurposed into shopping malls, museums, and memorials. Susana Draper uses the phenomenon of the “opening” of prisons and detention centers to begin a dialog on conceptualizations of democracy and freedom in post-dictatorship Latin America. Focusing on the Southern Cone nations of Uruguay, Chile, and Argentina, Draper examines key works in architecture, film, and literature to peel away the veiled continuity of dictatorial power structures in ensuing consumer cultures.

The afterlife of prisons became an important tool in the “forgetting” of past politics, while also serving as a reminder to citizens of the liberties they now enjoyed. In Draper’s analysis, these symbols led the populace to believe they had attained freedom, although they had only witnessed the veneer of democracy—in the ability to vote and consume.

In selected literary works by Roberto Bolaño, Eleuterio Fernández Huidoboro, and Diamela Eltit and films by Alejandro Agresti and Marco Bechis, Draper finds further evidence of the emptiness and melancholy of underachieved goals in the afterlife of dictatorships. The social changes that did not occur, the inability to effectively mourn the losses of a now-hidden past, the homogenizing effects of market economies, and a yearning for the promises of true freedom are thematic currents underlying much of these texts.

Draper’s study of the manipulation of culture and consumerism under the guise of democracy will have powerful implications not only for Latin Americanists but also for those studying neoliberal transformations globally.

“Bound to become an instant classic: a key reference in the debate on Latin American postdictatorships as well as the field of memory studies at large. . . Draper’s study--brilliantly introduced through a pioneering critical reading of Argentine architect Juan Carlos Lopez, who is the leading mall developer in Latin America today--has the rare virtue of being instantly plausible, and thus of opening up a whole new series of critical inroads. “--The Americas


“A significant contribution to comparative literature and cultural criticism.”—Journal of Latin American Studies

Susana Draper is assistant professor of comparative literature at Princeton University.
Loading...
or
Not Currently Available for Direct Purchase