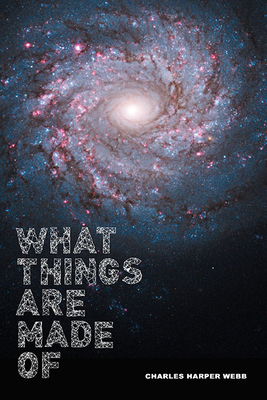 What Things Are Made Of (Pitt Poetry Series) (Paperback)

Charles Harper Webb is celebrated for his use of humor; yet even his funniest poems rise, as the best comedy must, out of deep human drives, sorrows, and needs. Powerful immersions in what it means to be human, these poems explore the spectrum of emotions from love to hate, tenderness to brutality. They can be withering and vulnerable in the same breath. Models of clarity and vividness, they are mysterious when they need to be, ranging from lyric to narrative, from realism to wild surreal flights, powered by a fierce, compassionate intelligence. Metaphors of startling aptness and originality, a voice at once endearing and provocative, high musicality, propulsive energy, wild imaginative leaps, as well as mastery of diction from lyricism to street-speak, create a reading experience of the first order. Uniformly fun to read, these poems go down easy, but pack a wallop. As Robert Frost said poetry should do, What Things Are Made Of "begins in delight and ends in wisdom."

Charles Harper Webb is the author of numerous poetry collections, including Reading the Water, Liver, Tulip Farms and Leper Colonies, Hot Popsicles, Amplified Dog, and Shadow Ball: New and Selected Poems. His poems have appeared in many journals and anthologies, including Best American Poetry, the Pushcart Prize, and Poets of the New Century. Webb has received the Morse Prize, Kate Tufts Discovery Award, Pollak Prize, and Saltman Prize, as well as a Whiting Writer's Award and a Guggenheim fellowship. He is professor of English at California State University, Long Beach, and teaches in the MFA in creative writing program there.

Praise For What Things Are Made Of (Pitt Poetry Series)…

"What Things Are Made Of is a delicious antidote to the solemnities, banalities, and absurdities of our culture, treated by Charles Harper Webb with hilarity and amiability. But lest you be tomfooled into thinking Webb is one of those poets who is all language and no heart, be warned—he also writes some of the best poems of love, sex, childhood, and mortality that we’ve got.”
—Alicia Suskin Ostriker

“As in a madman’s rickety invention, the silver ball of Charles Harper Webb’s imagination rolls down Egyptian railroad tracks in locomotives powered by burning mummies, until its final moonwalk stage left to the end of nostalgia—where it puts a period to the modern age to which we’re sentenced. It’s a wild ride, and it's over too soon, but for just ten cents you can turn the page and start at the top again. Hilarious, kinetic, profound, Webb’s poems are always a strange and fun adventure. So buy this book, plug in your dime, and get the ball rolling!”
—Tony Barnstone

“Flannery O’Connor said that the best comedy ‘is always about matters of life and death,’ a truth demonstrated masterfully in What Things Are Made Of. With his discerning wit, musician’s ear, and big heart—plus a newly deepened tone of melancholy—Webb takes us on a seriocomic journey down the potholey road from youth to maturity in an age where ‘truth’ shifts like ants on a Klondike [bar].’ The melancholy is countered by the book’s prevailing motif: love—schmaltz-free—of wife and son, of beleaguered humankind (most of it), of rock ‘n’ roll and fly fishing, of the ‘big band’ of a new day. If you’re looking for a reader friendly work by one of America’s best poets writing at his best, get out your wallet.”
—William Trowbridge

“Twelve years ago when I first plucked Webb’s Liver from the crush it pinned me to the carpet of the bookstore aisle. Books later, here I am on his planet of What Things Are Made Of, spelunking the Dickeyville Grotto, ‘Bimbo Limbo,’ and Andy’s Texaco. Webb’s Things—crafted  from a recombinant cynical romanticism that dreams with one eye open—groan and growl out of the ‘cracked crankcase’ of his wildness. Dare, dear reader, to harness yourself to this bungee jump that—anguished, masterful, and still deeply funny on the hundredth reading—will dangle you over the precipice, where you will get an eyeful, an earful, and have a polyphonic three-bone time. Webb’s gift won’t let you down.”

“Webb swerves effortlessly between humor and the sort of introspection that we all must feel from time to time. . . . [he] is spectacular at the funnier side of life. Who can’t identify with the confounding way memory works, jettisoning knowledge in favor of trivia?”

“Webb displays such a wonderfully quirky, idiosyncratic voice, whether writing about oil-slicked, doomed penguins or puppy love. His poems careen between wild hyperboles, the irony of looking back at youthful indiscretions and unrequited or disappointed love, to the joy he feels with his beloved small son and wife, and his love of old rock bands like the Stones or Led Zeppelin. But there’s always something interesting, fascinating in this collection, something that makes us read and keep turning the pages, to see what new and deliriously strange take he’ll have on the things of this world.”

“Metaphors of startling aptness and originality, a voice at once endearing and provocative, high musicality, propulsive energy, wild imaginative leaps, as well as mastery of diction from lyricism to street-speak, create a reading experience of the first order. Uniformly fun to read, these poems go down easy, but pack a wallop . . . I laughed, I cried, and I spent time mulling over his lines for days.”