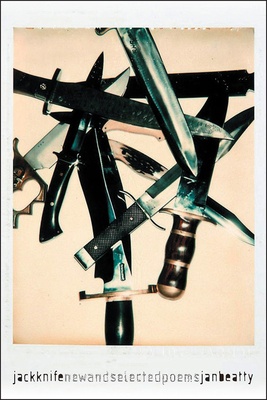 In Jan Beatty’s fourth collection, The Switching/Yard, she takes us through the ravaged landscape of the American West. In unflinching lines of burning lyric and relentless narrative, she forges the constructed body into movement. What is still stereotyped as the romantic journey—now becomes as scarred as the Rust Belt. What lives in our collective unconscious as the Golden West becomes almost surreal, as these poems snap that vision in half with extended description of ghost explorers.

We see the open truck cab, the farm workers on the corner waiting for pick-up; we see the speaker returning west to find the long-abandoned story of the birthfather. There is no stable landscape here except the horizontal action of moving through. Landscape becomes story. In this extended tale of the idea of family, we find stand-ins for the father in the form of a hit man, Jim Morrison, and ultimately the unyielding road takes the place of the body. The Switching/Yard is at once the horizontal world of the birth table where babies are switched, the complex yard of the body where gender routinely shifts and switches, and the actual switching yard of the trains that run the inevitable tracks of this book.

“The Switching/Yard is Jan Beatty's unflinching and unapologetic turn, a fierce conflagration of lyric and gorgeously rendered narrative that refuses to give the reader a chance, or reason, to turn away. There is no predictable rooting here, no way to dismiss these stanzas as simple leaps in the evolution of a starkly talented storyteller. Beatty's staunch refusal to bow to the ordinary—her ‘switching’ of gender roles, positions of power, or the very idea of home—infuses this volume with a brilliance not open to debate.”
—Patricia Smith

“When I step inside Jan Beatty’s poetry, I know I’m entering a place that is inhabited. I feel her presence in every space—whether it’s the ghostly train yard (‘the brokenness of a highway dream’) or a maximum-security prison. Beatty is a poet who speaks with courage and experience. Her poems are electrifyingly candid. Remember the scene in Mommy Dearest when Faye Dunaway stares down the stuffed shirts of the corporate boardroom? ‘This ain’t my first time at the rodeo.’ Jan Beatty could have snapped that entire table in half with the raw energy of her words. In the words of R&B vocalist Carl Carlton, ‘she’s a bad mamajama.’”
—D. A. Powell

“In this aptly titled collection, Jan Beatty zigzags back and forth from mournful balladeer to hopped-up punk, from Pittsburgh smokestacks to Fresno train yards, ‘from wreckage to plunder.’ Full of Western vistas, dead-end bars, lying fathers, and midnight highways, The Switching/Yard is a ferocious post-post-Beatnik mash-up—part Bukowski, part Wanda Coleman—a barbaric yawp ‘lost in the big cosmic bath / where grief and ecstasy meet.’”
—Campbell McGrath

”Pablo Neruda Prize winner Beatty’s persona wears her mother like a dress (‘her neck a blue V / for her blue vagina that birthed six babies’), tries to buy a gun off a man who has ‘hurt people,’ and moodily declares that there is ‘nothing as lonely as / a crane not working.’ In short, she cannily captures a desolate American landscape, striking the pose of a skate punk kickflipping his board: ‘brilliantly indestructible’.”

”Takes us on an unforgettable quest through two countries, through crack dens and ghost railyards, beat-up cars and rolling orchards, to the final soaring words of love and redemption. It is, in simplest form, the story of fighting to find one’s place in a shattered world.”

“There’s a distinctive voice, remarkable poems that arrive at distilled moments of tenderness.”

Jan Beatty is the author of three previous poetry collections: Red Sugar, Boneshaker, and Mad River, winner of the Agnes Lynch Starrett Poetry Prize. She is the recipient of the Creative Achievement Award in Literature from the Heinz Foundation, the Pablo Neruda Prize for Poetry, two fellowships from the Pennsylvania Council on the Arts, and inclusion in The Best American Poetry 2013, among other honors. Beatty is cohost and producer of Prosody, a weekly radio program featuring the work of national writers. She is the director of the creative writing program at Carlow University.
or support indie stores by buying on