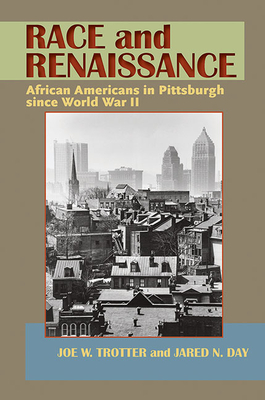 African Americans from Pittsburgh have a long and distinctive history of contributions to the cultural, political, and social evolution of the United States. From jazz legend Earl Fatha Hines to playwright August Wilson, from labor protests in the 1950s to the Black Power movement of the late 1960s, Pittsburgh has been a force for change in American race and class relations.

Race and Renaissance presents the first history of African American life in Pittsburgh after World War II. It examines the origins and significance of the second Great Migration, the persistence of Jim Crow into the postwar years, the second ghetto, the contemporary urban crisis, the civil rights and Black Power movements, and the Million Man and Million Woman marches, among other topics.

In recreating this period, Trotter and Day draw not only from newspaper articles and other primary and secondary sources, but also from oral histories. These include interviews with African Americans who lived in Pittsburgh during the postwar era, uncovering firsthand accounts of what life was truly like during this transformative epoch in urban history.

In these ways, Race and Renaissance illuminateshow African Americans arrived at their present moment in history. It also links movements for change to larger global issues: civil rights with the Vietnam War; affirmative action with the movement against South African apartheid. As such, the study draws on both sociology and urban studies to deepen our understanding of the lives of urban blacks.

Praise For Race and Renaissance: African Americans in Pittsburgh since World War II…

“This exquisitely researched book is a fine resource for understanding how deindustrialization and urban renewal shaped Black America post World War II. From these pages emerges a remarkable portrait of a people determined to win full equality and self-determination in spite of mounting obstacles. It is an essential reference for those interested in cities, twentieth-century history, and African American studies.”

“Breaks new ground as the first significant history of the African American community of Pittsburgh since World War II. The authors’ approach is wide-ranging, covering issues of civil rights, housing and segregation, organizational development, and political involvement, among other subjects.  What makes this volume particularly valuable, however, is its placement of Pittsburgh’s black community in the framework of the city’s decline as an industrial center and eventual rebirth as a smaller city with a postindustrial economic base.  It deserves a wide readership.”

“Imaginatively conceived, well researched, and engagingly written. Trotter and Day have crafted a new standard for the study of African American community that deepens our understanding of urban black culture formations and the transformations in, and manipulations of, political power. They admirably demonstrate the complexity of African Americans’ efforts to seize the Dream and make real a new birth of freedom.”

“By no means the last word on the subject . . . only the first, but it issues a wakeup call to the collective civic conscience that is long overdue.”
—Pittsburgh Quarterly

“An excellent book. The authors’ research is exemplary, providing a model for similar studies as well as a reminder for everyone that the civil rights revolution is far from complete. Highly recommended.”
—Choice

“In providing us with this lucid history of Pittsburgh’s African American community, Trotter and Day shed new light on how past actions inform present conditions in the Steel City’s black neighborhoods. Their case study, the first of its kind on post-war Pittsburgh, will prove especially useful to urban historians seeking new ways to understand African American’s changing roles and responses in the face of the structural reordering of postwar urban America.”
—H-Net Reviews

Joe W. Trotter is Giant Eagle Professor of History and Social Justice, head of the history department, and director of the Center for Africanamerican Urban Studies and the Economy (CAUSE) at Carnegie Mellon University. He is the author of numerous books, including The African American Experience and River Jordan: African American Urban Life in the Ohio Valley.
Loading...
or support indie stores by buying on