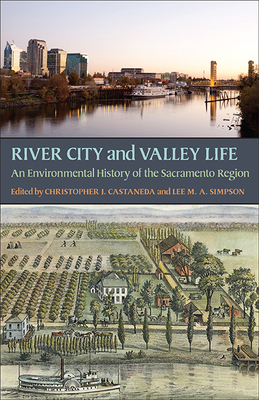 Often referred to as “the Big Tomato,” Sacramento is a city whose makeup is significantly more complex than its agriculture-based sobriquet implies. In River City and Valley Life, seventeen contributors reveal the major transformations to the natural and built environment that have shaped Sacramento and its suburbs, residents, politics, and economics throughout its history.

The site that would become Sacramento was settled in 1839, when Johann Augustus Sutter attempted to convert his Mexican land grant into New Helvetia (or “New Switzerland”). It was at Sutter’s sawmill fifty miles to the east that gold was first discovered, leading to the California Gold Rush of 1849. Nearly overnight, Sacramento became a boomtown, and cityhood followed in 1850.

Ideally situated at the confluence of the American and Sacramento Rivers, the city was connected by waterway to San Francisco and the surrounding region. Combined with the area’s warm and sunny climate, the rivers provided the necessary water supply for agriculture to flourish. The devastation wrought by floods and cholera, however, took a huge toll on early populations and led to the construction of an extensive levee system that raised the downtown street level to combat flooding. Great fortune came when local entrepreneurs built the Central Pacific Railroad, and in 1869 it connected with the Union Pacific Railroad to form the first transcontinental passage. Sacramento soon became an industrial hub and major food-processing center. By 1879, it was named the state capital and seat of government.

In the twentieth century, the Sacramento area benefitted from the federal government’s major investment in the construction and operation of three military bases and other regional public works projects. Rapid suburbanization followed along with the building of highways, bridges, schools, parks, hydroelectric dams, and the Rancho Seco nuclear power plant, which activists would later shut down. Today, several tribal gaming resorts attract patrons to the area, while “Old Sacramento” revitalizes the original downtown as it celebrates Sacramento’s pioneering past.

This environmental history of Sacramento provides a compelling case study of urban and suburban development in California and the American West. As the contributors show, Sacramento has seen its landscape both ravaged and reborn. As blighted areas, rail yards, and riverfronts have been reclaimed, and parks and green spaces created and expanded, Sacramento’s identity continues to evolve. As it moves beyond its Gold Rush, Transcontinental Railroad, and government-town heritage, Sacramento remains a city and region deeply rooted in its natural environment.

Christopher J. Castaneda is professor of history at California State University, Sacramento. He is the author or coauthor of numerous books, including: Dedication. Vision. Heart: The CalPERS Story; Keeping the Promise: A History of the California Department of Justice; and Invisible Fuel: Natural and Manufactured Gas in American History, 1800–2000.

Lee M. A. Simpson is professor of history at California State University, Sacramento. She is the author, coauthor, or editor of several books, including: Selling the City: Gender, Class, and the California Growth Machine; Fair Oaks, California; and Sacramento’s Oak Park.

“Presents its readers with original and provocative ways to think about urban history and the life force of a city throughout its past. Provides something new for urban environmental historians and historians of California in its focus on the relationship between cities, residents, and the landscape.”
—Agricultural History

“This fascinating urban environmental history provides a wide-ranging overview of the diversity of landscapes both natural and built that make up the understudied Sacramento region. Each author’s contribution provides depth and breadth to a growing body of knowledge of the organic relationship between environmental history and the history of urban growth and development in the American West. This volume makes the reader want to revisit (or visit for the first time) the city of Sacramento armed with a new understanding of its rich, varied, and sometimes troubling history.”

“In this fine set of essays on Sacramento, a distinguished group of historians ask what made and makes the city unique. The collection provides fascinating snapshots of agriculture, the gold rush, railroads, urban planning, boosterism, flood control, the New Deal, military bases, nuclear power, Old Sacramento, the American River Parkway, Indians, and Indian gaming. The collection will appeal to urban historians as well as to specialists in the West, California, and the environment.”

“River City and Valley Life makes a valuable contribution to the environmental history of America’s cities. Individually, its well-written chapters bring an essential environmental perspective to topics as diverse as gold mining, flood control, nuclear power, and suburbanization. Together, they paint a compelling portrait of a city firmly embedded in the natural world.”
—Michael Rawson, Brooklyn College and the CUNY Graduate Center
or
Not Currently Available for Direct Purchase
Copyright © 2020 American Booksellers Association