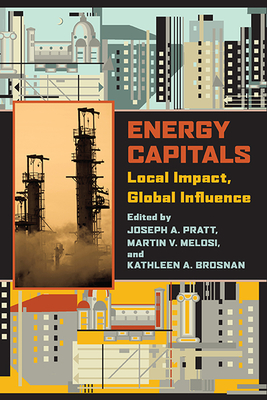 Fossil fuels propelled industries and nations into the modern age and continue to powerfully influence economies and politics today. As Energy Capitals demonstrates, the discovery and exploitation of fossil fuels has proven to be a mixed blessing in many of the cities and regions where it has occurred.

With case studies from the United States, Canada, Mexico, Norway, Africa, and Australia, this volume views a range of older and more recent energy capitals, contrasts their evolutions, and explores why some capitals were able to influence global trends in energy production and distribution while others failed to control even their own destinies. Chapters show how local and national politics, social structures, technological advantages, education systems, capital, infrastructure, labor force, supply and demand, and other factors have affected the ability of a region to develop and control its own fossil fuel reserves. The contributors also view the environmental impact of energy industries and demonstrate how, in the depletion of reserves or a shift to new energy sources, regions have or have not been able to recover economically.

The cities of Tampico, Mexico, and Port Gentil, Gabon, have seen their oil deposits exploited by international companies with little or nothing to show in return and at a high cost environmentally. At the opposite extreme, Houston, Texas, has witnessed great economic gain from its oil, natural gas, and petrochemical industries. Its growth, however, has been tempered by the immense strain on infrastructure and the human transformation of the natural environment. In another scenario, Perth, Australia, Calgary, Alberta, and Stavanger, Norway have benefitted as the closest established cities with administrative and financial assets for energy production that was developed hundreds of miles away.

Whether coal, oil, or natural gas, the essays offer important lessons learned over time and future considerations for the best ways to capture the benefits of energy development while limiting the cost to local populations and environments.

Joseph A. Pratt is the NEH-Cullen Professor of History and Business at the University of Houston where he has served as chair of the history department and interim dean of the College of Liberal Arts and Social Sciences. He is the coordinator of the Energy Management and Policy Group at the University of Houston and the director of the Houston History Project. Pratt has written extensively on both the history of the petroleum industry and Houston. His latest book is Exxon: Transforming Energy, 1973-2005.

Martin V. Melosi is Hugh Roy and Lillie Cranz Cullen University Professor and director of the Center for Public History at the University of Houston. Melosi received the Distinguished Service Award from the American Society for Environmental History (ASEH) and the Esther Farfel Award from the University of Houston. He has served as president of the ASEH, the National Council on Public History, the Public Works Historical Society, and the Urban History Association. Melosi has written or edited nineteen books, most recently Atomic Age America.

Kathleen A. Brosnan is Paul and Doris Eaton Travis Chair of Modern American History at the University of Oklahoma. She also received the Distinguished Service Award from ASEH and currently is ASEH president-elect. She is the author of Uniting Mountain and Plain: Cities, Law, and Environmental Change along the Front Range, editor of the four-volume Encyclopedia of American Environmental History, and coeditor of City Dreams, Country Schemes: Utopian Visions of the Twentieth-Century American West.

“This collection is further evidence of a growing positive trend toward collaboration and interdisciplinarity between (environmental) history, geography, and related fields like science and technology studies. As such the text would be of great use to courses examining energy, natural resources, and environmental history from an industrial perspective; selections from the book might be appropriate and interesting additions to regional geography courses. But the text would also benefit courses in urban history, and perhaps also as additional readings in courses focused on economic geography, globalization, or any other situation that seeks to illustrate the physical and environmental impacts of natural resource-based economic growth.”
—Social & Cultural Geography