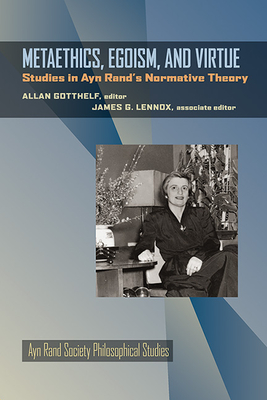 Philosopher-novelist Ayn Rand (1905–1982) is a cultural phenomenon. Her books have sold more than 25 million copies, and countless individuals speak of her writings as having significantly influenced their lives. In spite of the popular interest in her ideas, or perhaps because of it, Rand’s work has until recently received little serious attention from academics. Though best known among philosophers for her strong support of egoism in ethics and capitalism in politics, there is an increasingly widespread awareness of both the range and the systematic character of Rand’s philosophic thought. This new series, developed in conjunction with the Ayn Rand Society, an affiliated group of the American Philosophical Association, Eastern Division, seeks a fuller scholarly understanding of this highly original and influential thinker.

The first volume starts not with the metaphysical and epistemological fundamentals of Rand’s thought, but with central aspects of her ethical theory. Though her endorsement of ethical egoism is well-known—one of her most familiar essay collections is The Virtue of Selfishness—the character of her egoism is not.  The chapters in this volume address the basis of her egoism in a virtue-centered normative ethics; her account of how moral norms in general are themselves based on a fundamental choice by an agent to value his own life; and how her own approach to the foundations of ethics is to be compared and contrasted with familiar approaches in the analytic ethical tradition. Philosophers interested in the objectivity of value, in the way ethical theory is (and is not) virtue-based, and in acquiring a serious understanding of an egoistic moral theory worthy of attention will find much to consider in this volume, which includes critical responses to several of its main essays.

“The Ayn Rand Society Philosophical Studies series will further the serious study of Ayn Rand, placing her in the history of philosophy and helping to demonstrate the originality and depth of a philosopher who is still often overlooked.”
—Michael S. Berliner, Founding Director, Ayn Rand Institute and Senior Advisor, Ayn Rand Archives

“The current interest in Ayn Rand and her writings—in the media, in schools and universities, and in academic publication—is great and growing. This series provides an opportunity for accurate, insightful, and knowledgeable treatment of her work.”
—Shoshana Milgram Knapp, Virginia Tech

“The authors collected in Gotthelf and Lennox’s book plainly show how Rand’s work is relevant both to the analytic and existentialist traditions in moral philosophy, and is worthy of study for the issues it addresses within the Objectivist framework. . . . With the popularity of Rand’s ideas, the book is certainly recommended for ethicists, upper year scholarly classes and academic libraries.”
—Philosophy in Review

“This collection of essays by Rand scholars and other academic philosophers is a fruitful interchange between the Objectivist philosophy of Ayn Rand and contemporary ethical theory.  The book includes valuable exchanges on questions about the metaphysics, epistemology, and normative content of ethics. . . . Lively, informed, and sophisticated. . . . The exchange of ideas should benefit Rand scholars and all philosophers interested in the foundation of ethics.”

“The reader will benefit from what both of the authors have to say about Rand’s ethics. This collection is highly recommended.”

“This volume takes up a wide variety of metaethical issues that are important both for those who look to Rand for inspiration and those who do not. Once can hope the conversation continues, for mutual benefit.”
—Reason Papers

Allan Gotthelf is a visiting professor in the Department of History and Philosophy of Science at the University of Pittsburgh. He is emeritus professor of philosophy at The College of New Jersey and has taught on a visiting basis at Swarthmore, Oxford, Georgetown, Tokyo Metropolitan, and the University of Texas at Austin. Gotthelf is the author of On Ayn Rand and Teleology, First Principles, and Scientific Method in Aristotle’s Biology (forthcoming), and is coeditor of Philosophical Issues in Aristotle’s Biology.

James G. Lennox is professor of history and philosophy of science at the University of Pittsburgh. He is the author of Aristotle: On the Parts of Animals I-IV, and Aristotle’s Philosophy of Biology: Studies in the Origins of Life Science. Lennox is coeditor of Philosophical Issues in Aristotle’s Biology; Self-motion from Aristotle to Newton; and Concepts, Theories and Rationality in the Biological Sciences.