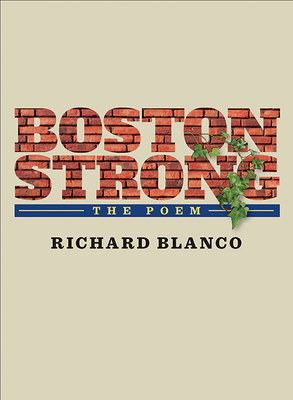 The Poem to benefit The One Fund Boston

Boston Strong is a commemorative chapbook that beautifully reproduces Richard Blanco’s poignant poem presented May 30, 2013 at the benefit concert to help the people most affected by the tragic events that occured on April 15, 2013 during the Boston Marathon.

The net proceeds from the sale of this book benefit The One Fund Boston.

The One Fund Boston was established through the generosity of businesses, foundations, and individual donors. The Victim Relief Fund of The One Fund Boston will be used to assist those families of the victims who were killed and the victims who were most seriously affected as a result of the tragic events during the Boston Marathon on April 15, 2013, and related events on April 18 and April 19.

Richard Blanco, selected as the 2013 inaugural poet by President Barack Obama, is the author of three poetry collections: Directions to The Beach of the Dead, winner of the PEN/Beyond Margins Award;  City of a Hundred Fires, winner of the Agnes Lynch Starrett Poetry Prize, and Looking for The Gulf Motel, winner of the Paterson Poetry Prize. Exploring themes of Latino identity and place, his poems have appeared in Best American Poetry 2000 and Best American Prose Poems and have been featured on NPR.  Blanco is a fellow of the Bread Loaf Writers Conference, recipient of two Florida Artist Fellowships, and has taught at Georgetown and American universities. A builder of cities and poems, Blanco is also a professional civil engineer.
Loading...
or
Not Currently Available for Direct Purchase