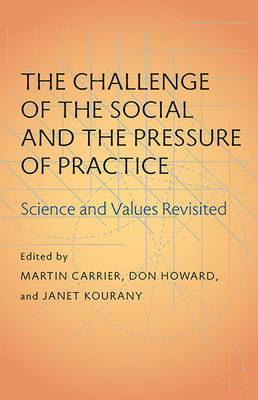 The Challenge of the Social and the Pressure of Practice (Paperback)

In The Challenge of the Social and the Pressure of Practice, philosophers, sociologists, and historians of science offer a multidisciplinary view of the complex interrelationships of values in science and society in both contemporary and historic contexts. They analyze the impact of commercialization and politicization on epistemic aspirations, and, conversely, the ethical dilemmas raised by “practically relevant” science in today's society. For example, much scientific research over the past quarter century has been guided by the financing that supports it. What effect has this had on the quality of research produced and the advancement of real knowledge?

The contributors reveal how social values affect objectivity, theory, and the direction of inquiry, and examine the byproducts of external value systems in topics such as “expertise” and “socially robust knowledge,” among others. They view science's own internal value systems, the earlier disconnection of societal values from the scientific process, and the plausibility of “value free” science.

The Challenge of the Social and the Pressure of Practice presents an in-depth analysis that places the role of values at the center of philosophical debate and raises questions of morality, credibility, and the future role of values in scientific inquiry.

Praise For The Challenge of the Social and the Pressure of Practice: Science and Values Revisited…

“This is an important collection of essays, by some of the best people in the field, on the most important and timely issue of the relations between science and values.  These are issues that affect everyone.”
--Peter Machamer, University of Pittsburgh

“The early logical empiricists, the founders of modern philosophy of science, thought it impossible to arrive at a rational discourse about norms and values, and aimed at a value-free philosophy of science. In the meantime it has become clear that norms and values pervade the whole scientific enterprise from the beginning to the end. This splendid book that carefully confronts diverging views on this topic is a worthwhile introduction to the role and impact of epistemic and social values in science.”
--Gereon Wolters, University of Konstanz

“The Challenge of the Social and the Pressure of Practice takes the reader from the inside of philosophy to the outskirts of power. The discussion of epistemic and non-epistemic values prepares the ground. It leads to the question whether scientific knowledge needs to be more than merely correct-whether it ought to be socially robust as well. In the last part epistemic values are put under pressure by demands for economic benefit. Do these demands compromise or inspire the search for better knowledge? If only for the scope of this investigation, The Challenge of the Social and the Pressure of Practice is important reading for the philosophy of contemporary science.”
--Alfred Nordmann, University of Darmstadt, Germany
or support indie stores by buying on
Copyright © 2020 American Booksellers Association